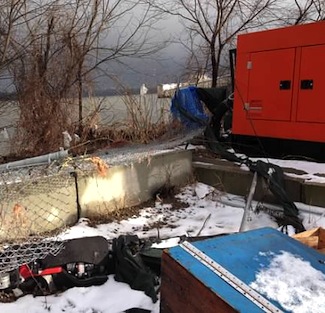 A coalition of environmental, non-profits and civic groups wrote to NYS Governor Andrew Cuomo on Jan 8 about the pending decision to approve United Water’s plan to build a desalination plant in Haverstraw. Damage from Hurricane Sandy wrecked a pilot desalination facility and destroyed homes and oil tanks near the site by the river. Following Hurricane Sandy, Cuomo said “I joked with President Obama that we seem to have a 100-year flood every two years, but at this point I don’t believe it is a fluke and it won’t happen again.”

If United Water’s desalination plant, proposed for Haverstraw Bay, had been built last year, the critical water intake pipes and pump house would have been destroyed by Hurricane Sandy. Unprecedented hurricane storm surges, ten feet in Haverstraw Bay, stripped the fronts off houses near the water, and dislodged intake pipes and mangled equipment used for United Water’s pilot plant. The hurricane knocked Panco’s marine fuel tanks into the Hudson River and forced the shutdown of Indian Point, located only 3.5 miles upstream from the proposed intake for United Water’s plant. Raw sewage flooded the area adjacent to the proposed water supply intake. Access roads to the proposed sites, needed in emergencies, were completely flooded and impassable. In short, the storm would have jeopardized public water supply for hundreds of thousands of people.

Today, the same pre-Hurricane Sandy DEIS is still being evaluated by the NY State DEC. With forecasts of 4 to 6 foot local sea level rise by end of century , it would be a terrible mistake to move this proposal ahead without a fundamental re-evaluation in the light of the devastation we have all just seen. FEMA is still revising its hazard maps following Hurricane Sandy. The new flood maps will likely raise the hazard zone to 17 feet for 500 year storms, placing the desalination plant infrastructure well within the hazard zone.

Governor Cuomo, your strong leadership following the storm makes it clear that you understand the urgency of climate change. A few days after the storm, you stated, ‘€œExtreme weather is the new normal’€¦ We must begin by thinking about where and how we rebuild. The next generation’s infrastructure must be able to withstand another storm.’€ We must think carefully, you said, ‘€œabout where we locate critical pieces of our infrastructure network’€¦’€
In stark contrast to these far-sighted statements, United Water’s proposed infrastructure would actually make our community more vulnerable to future super storms, not more climate resilient. 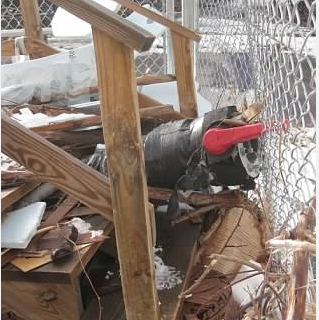 In your post-Sandy comments, you also called for reducing energy use: ‘€œRecent events demand that we get serious once and for all.’€ Desalination, however, is one of the most energy intensive water supply sources. It would lock our county into substantial increases in greenhouse gas emissions while more sustainable options have hardly been given serious examination.

Finally, given the $189 million in currently projected costs, it makes no sense to site our water supply source in such a vulnerable area, leaving Rockland residents with the likelihood of substantial future costs to rebuild or replace massively expensive essential infrastructure.

The Rockland Water Coalition represents 27 local and major regional groups, as well as the 24,500 residents who have signed petitions, all opposed to this unaffordable, unnecessary, outdated, and unsafe proposal. We call for the following actions to protect our community from future climate impacts:

The message of the storm was clear: climate change is here now. It is urgent that we make our communities as climate resilient as possible, while also taking action now to reduce our carbon footprint steeply. The proposed desalination plant, however, would move New York State in exactly the opposite direction. As the first desalination plant in New York State, it would also set a dangerous precedent, affirming unchecked consumption of water, instead of sound water conservation and efficiency practices and other less energy intensive water sources.

In contrast, in your Mid-Hudson Regional Sustainability Initiative, as well as in the Smart Growth Public Infrastructure Policy Act, a new generation of leaders have laid out a different way forward, an integrated approach that balances and fosters environmental, social and economic interests, while protecting the next generation.

Governor Cuomo, we are asking your assurance that United Water’s desalination proposal not be permitted to proceed without fundamental re-evaluation in light of recent climate events. In a bipartisan show of support, the Rockland Legislature voted 15 to 1 to pass a resolution requesting an issues conference. An unprecedented number of our top elected leaders have asked for a re-examination of United Water’s desalination proposal and many have also asked for denial of this proposal in order to give time to implement sustainable alternatives in Rockland County.

We can do better. Rockland County has already made real progress toward creating an environmentally and fiscally sound water policy that could be a model throughout the state. Now we are asking you to give Rockland County the support it needs to move ahead with sustainable alternatives. Following the model your leadership has put in place, we can better protect our community from climate impacts and reduce our carbon footprint, while creating green jobs and building a stronger local economy today.