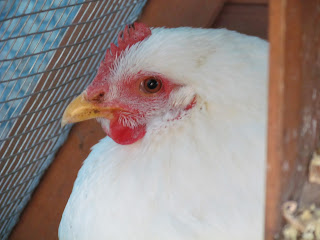 We’ve had backyard chicken drama, but we’ve never had trauma quite this severe. My poor hens are so upset after a couple of recent attacks by large birds of prey. I’m not sure if they are hawks, eagles or falcons, but they’ve been seen circling the area, and last week one of them attacked and killed either Kaitlynn or Allison (Unfortunately, I could never tell them apart!).

A couple of days later, the predator came back and tried to take Harley I know it was a bird because I heard the flap of wings and saw a shadow fly overhead right after a loud commotion. I assumed she was gone after seeing a bunch of black and white feathers in the corner of the yard. 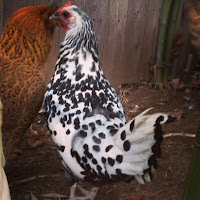 It seemed like such a lost cause, I didn’t even bother to pray, but miracle of miracles! She came back in good health (minus a few feathers) a couple of days later. That girl knows how to scamper!

Another local friend who owns chickens told me that a falcon attacked one of their hens. She was found laying on her back, screaming and paralyzed. After several days of care, she was still unable to walk and had to be euthanized.

My hens seem terrified. They’re not eating with their usual appetite. and there hasn’t been a egg laid in over a week.

They seem reluctant to come out of the coops, and spend most of the day huddled together in a corner, behind the compost bins. 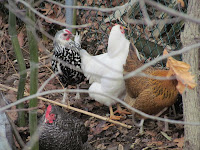 Is there such a thing as chicken PTSD? I wonder how long it takes for chickens to heal after an event like this. It’s so sad to lose a hen ‘€“ they are our pets, after all. I try to console myself with the knowledge that some desperately hungry being is getting fed, and it’s part of the cycle of life. In three years of keeping a total of 8 chickens, I’ve lost 2 to predators.

Jennifer Hausler writes the Nyack Backyard blog.
In this article: