In this feature, architecture graduate student William Weber looks at New York neighborhoods trying to imagine what they will be like in the future.

This somewhat dystopian view of a future Tappan Zee Bridge has removed all of the current buildings in Tarrytown. This may be a result of a future invading alien force, one of whose strangely shaped water craft to the right of the bridge vaguely resembles the USS Monitor ironclad from the Civil War. Clearly, that’s an unlikely scenario; it’s more likely that all of the residents of the river village communities simply grew old and died waiting for mass transit to be added to the 2018 version of the Tappan Zee Bridge. 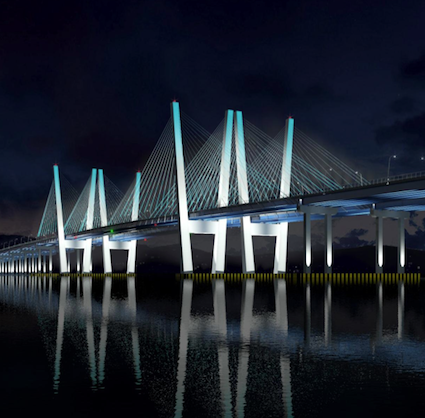 The winning proposal for a new Tappan Zee Bridge, which resembles a pair of tuning forks.

To see a full sized version of what Curbed calls the “alternaTappan Zee,” visit Imagining an Alternative Look for the Tappan Zee Bridge.

As Others See Us is an occasional feature that publishes what publciations outside of Nyack say about the people and places in the Lower Hudson Valley.

In this article:Planning/Dvlpmnt, Rockland County