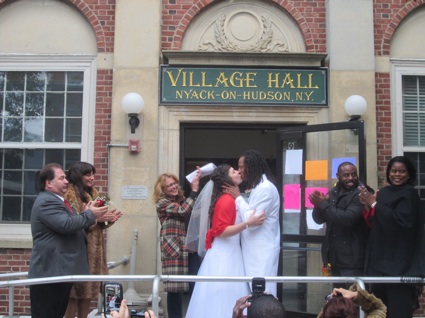 On the steps of Nyack’s Village Hall each morning since Sandy struck, there has been a public demonstration in civics, where elected officials inform the community of the latest post storm news. On Friday afternoon, there was a different kind of event outside of Village Hall: a demonstration of love. Nyack residents Marqui Miguel Julien and Antonia Carmela Rispoli were married by Nyack Mayor Jen White. The mayor met the couple last year when Julien released his music video “I Love Nyack”.

The couple was joined on the steps of Village Hall by their parents and friends complemented by a flute of champagne with two long-stemmed glasses sent over by the Velo restaurant across the street.

The bride declared that she was cold but happy, standing resplendent in a sleeveless gown with an orange shawl as the wind buffeted her veil. The groom, dressed in a white tuxedo, accessorized with shoulder length dreadlocks, invited everyone to a reception around the corner. “We are going to Casa Del Sol because that’s where I had my first performance. They supported my career so we want to celebrate with them tonight.”

“They are the most optimistic young people and I thank them for providing a moment of peace in the middle of the chaos of this storm,” said White.