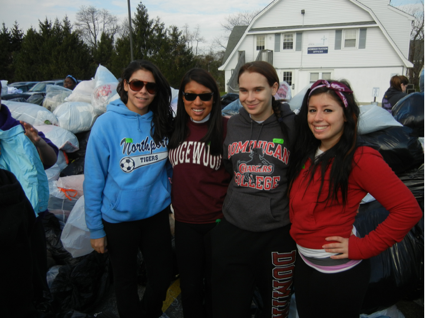 If you saw this sentence a month ago: “college students take weekend trip to the Jersey Shore,” images of Snooki would dance in your head.  In the aftermath of Superstorm Sandy, the ‘€œsituation‘€ has changed.

On Saturday, November 10, a group of eight students and staff from Dominican College in Orangeburg travelled to the Jersey Shore to participate in recovery efforts.  ‘€œWe found a relief focused Facebook page that had 40,000 likes just days after the storm,’€ said Val Nivar, an admission counselor at Dominican, who has been to the New Jersey shore to aid relief efforts twice since the storm. 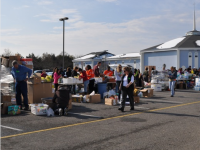 Lead by Ryan O’Gorman, the Director of Residence Life, the students rose early on Nov 10, piled into vans loaded with supplies and headed to a drop-off zone organized by Driscoll’s group in Toms River, New Jersey.  Working from a parking lot staging area, for the next five hours they loaded and unloaded a constant stream of trucks. The students wanted to see the devastation along the shoreline first hand, but two weeks after the storm, roads were still impassable.

Nivar returned on Saturday the 17th, and volunteered at the Long Beach Island Elementary School in Ship Bottom. The building was without electricity and heat and according to Nivar, will not be reopened because of the extent of the storm damage. Nivar described how the sand had taken over the landscape in the North Beach section of Long Beach Island, ‘€œThe dunes broke and the roads were gone.’€

In addition to the delegation that went to New Jersey, Dominican students traveled to Staten Island and the Rockaways in New York. The Rockaway mission was particularly poignant because the volunteers aided in the clean up of the home of a fellow student.

‘€œThe world doesn’t revolve around me,’€ said Dominican College Senior and Resident Advisor Amanda Bean to explain why she travelled to New Jersey to volunteer. The storm that awakened Amanda’s altruism did however revolve around more Americans that almost any weather system in US history. According to Brian McNoldy, a senior researcher at the University of Miami’s Rosenstiel School of Marine and Atmospheric Science, the energy released by Sandy when it came to shore was second only to Hurricane Isabel in 2003 and more powerful than Hurricane Katrina, Andrew and Hugo.

As life returns to normal in our river village, the road to recovery is still obscured with debris for too many of the 54 million Americans who were impacted by Sandy. Many of these families are eating their Thanksgiving meal in relief centers. The New Jersey Coast, Staten Island, the Rockaway’s in Queens and parts of Long Island are weeks and months away from normalcy.

Nivar says that the students want to return to help. We are now all united as Superstorm Sandy survivors. With weather systems so large that they can wreak havoc of thousands of square miles, we had better become acquainted with the concept of mutual aid and relief.