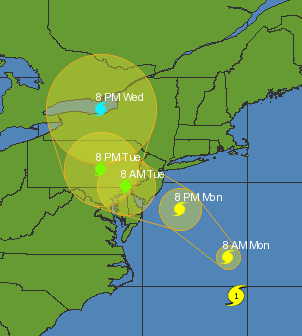 Nyack, Oct 29 (updated 10:15a)  — Here are ten things you should know about Hurricane Sandy, aka, the true “October Surprise” of this election season. Bob Dylan may have said “you don’t need a weatherman to know which way the wind blows” but T-Bone Walker’s lyrics to “They Call it Stormy Monday” are spot on for what Sandy has in store for us this week.

If you are singing the blues about Sandy — somone’s beat you to it. And has done a much better job of it, too. The lyrics to T-Bone Walker’s Call It Stormy Monday are downright prescient about the National Weather Service Sandy forecast: “They call it stormy Monday, but Tuesday’s just as bad….Wednesday’s worse, and Thursday’s also sad.”