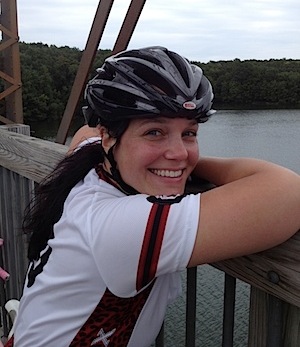 The wrong prescription lead to a shocking diagnosis that changed Jenni Laurita’s life, discovering that she had breast cancer at age 33. This weekend, the Rockland County native will ride for FatCyclist.com team in the Young Survival Coalition’s “Tour de Pink” bicycling fundraiser, a three day, 198 mile cycling event from Thousand Oaks, CA to Foothill Ranch, CA.

About 13,000 women under 40 are diagnosed with breast cancer each year.  Here’s one woman’s story of surprise, shock and survival.

‘€œYes, the results are here, but the doctor who reads them won’t be in until Tuesday, ‘€œ the increasingly rude receptionist said.

‘€œWell, is there any doctor there that can read them? I’m really nervous.’€

‘€œYou’re going to leave me waiting until Tuesday to find out if I have cancer because another doctor can’t give me my results?’€ I said, Friday afternoon.

‘€œMa’am, even if he could read you the results, if it was something bad you’d have to come in for an appointment’€.

The next call I got about 10 minutes later simply said, ‘€œCan you come in right now?’€

And in that office that day I heard the word for the first time.

I really don’t think I heard any other words that day other than ‘€œcancer,’€ over and over again. I don’t remember the doctor’s name, I don’t remember his description or speech, I only remember ‘€œcancer’€ and his unusually hairy arms ‘€” it was like a pelt of thick arm fur.

I sat in the parking lot, unable to drive, and I called my mother. I said, ‘€œWell, I got the best of the worst news’€ and told her that at this point it seems like we had caught it extremely early. In what amounted to a mistaken prescription given to me for a mammogram I was rightly too young to have, I was diagnosed with breast cancer.

Very tiny ‘€œgrains of sand’€ showed up in the moonscape image of my right breast. I had no intention of following up on his prescription, until at the end of the appointment he looked in my eyes and said, ‘€œPromise me you’ll go.’€

And so began my journey into the awful world of cancer. I had test after test after test. Every shadow, every perceived anomaly in both breasts was biopsied, a titanium marker left behind each time to mark the areas of concern. I look forward to the day I own a titanium bicycle, such a matchy matchy girl I am.

I turned into a human pincushion. The first few made me very upset; needles and I aren’t friends. By the last biopsy of that year, though, I was over it. I didn’t even stop eating my apple while the now-familiar team did what they do.

I had surgery in what can only be described as the most archaic and anachronistic of medical procedures, the details of which I’ll spare you. I bounded up the stairs post-surgery to cheerfully say goodbye to my surgeon, I was wearing Livestrong yellow.

And bad news: not clear margins, another surgery.

I asked if we could do it now. Today. Let’s go, get this done. My surgeon described how I needed to heal first before they cut me or it would be like shredding the carving of the Thanksgiving turkey. I had long become accustomed to people’s careless words. It seemed each conversation lately started with a story about someone who died of cancer, someone who had a botched surgery, someone who was currently dying.

If I could impart anything to the world through this forum it’s this: ask how the person is doing, offer help and support (from the mundane to the elaborate if you’re so inclined), and then zip it.

Ultimately, I did not need chemotherapy and ‘€” against medical advice ‘€” I refused radiation. I prayed, I meditated, I read scientific studies until I couldn’t see straight. And I listened to my body telling me the right choice for me; radiation was not without its risks. My inner voice saved my life before and I promised myself I’d never ignore it again. I could deal with recurrence more than I could deal with betraying my instincts and myself.

My surgery was Halloween 2008 (yes of course I showed up in costume, and insisted my cat ears and tail stay on); I was declared ‘€œcancer free’€ December 1 after the second surgery.

And so began followup.

Every three months, some form of test. Then I could stretch it to six months. Finally, I was put in the annual category: a momentous day!

Then, a few months ago, I went for a routine checkup to schedule my routine MRI and was told they don’t do that anymore, insurance is giving too hard a time paying for MRIs. Long story short, I fought and insisted on the MRI and got it. And then I got the phone call.

‘€œThe scan is not clear.’€ And then all I heard was a bunch of Charlie Brown teacher noise: ‘€œWah wah wah wah.’€ I made it through the phone call, hung up, and lost my composure.

Ok, losing my composure would be stubbing my toe and spilling my coffee. This was composure-obliterating ugly-cry. Through choking sobs I called my mother. Again. And again, heard her wishes that she could take it from me. And then I told my new sweetheart. Welcome to the world of being with a cancer survivor. He stepped up like a hero and held me every step of the way, what a monument of love.

In rare fashion, I shared my struggle with many people around me. I was loath to hear people’s scary words, but the support and love and outpouring of awesome from so many far outweighed the scary stories which I have now become adept at interrupting. Team Fatty family rallied around me. There were offers to drive hundreds of miles to be with me, there were frequent texts, calls, emails.

After a week of waiting for availability and more tears than I could count, I had my MRI biopsies and in the most-underwhelming call of the decade, I got a nurse on the phone to matter of factly tell me:

I hugged the first person I saw, whom ‘€” thankfully ‘€” I knew. Strangers in Wal-Mart were not so lucky when my mother found out.

So now I’m back to three-month follow-up, and though I’m not completely out of the woods right now, I’m well on my way.

North Jersey resident Jenni Laurita will ride in the three day Tour de Pink bike event in Southern California this weekend. The ride benefits the Young Survival Coalition (YSC) , a group which raises funds for young breast cancer survivors to help them find meaning, comfort and hope during one of the most challenging periods of their lives. She’s riding for Elden Nelson’s Team Fatty Bike, a group of avid cyclists and cancer fighters who are in second place among all teams fundraising for this event. Jenni asks that you consider donating to Team Fatty and Tour de Pink to help assure victory in a contest where we all win: the fight against breast cancer.