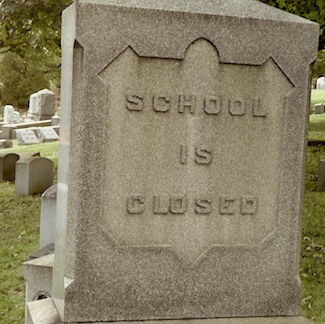 An unidentified headstone at Oak Hill Cemetery in Nyack.

by Bill Batson and Julia Dunnigan

Halloween 2012 is right around the corner. On Sat Oct 27, the Nyack Halloween Parade celebrates 25 years with goblins marching past Koblin’s beginning at 5:30p. After the march there’s a Monster Mash at the Nyack Center including a buffet and a children’s costume parade. And then there’s the Main Event on Wed Oct 31 that kids and candy makers look forward too all year long. To get you in the mood for the spooky week to come, here’s our Ghoulish Guide To Nyack: Halloween Edition. 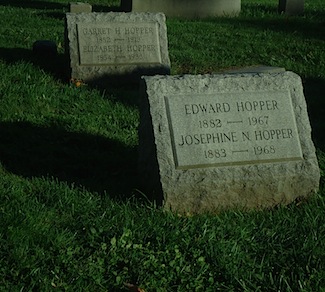 Up on Oak Hill, overlooking the village and the Hudson, is a place that is both famous and spooky, too. Oak Hill Cemetery is the final resting place for several celebrated Americans and the rumored home of several restless spirits.  Some of the notable permanent residents are actress Helen Hayes and her husband Charles MacArthur, author Carson McCullers and artist Edward Hopper. But these celebrities are not alone.

For decades, people have been saying they have seen someone pass by them while in the cemetery, only for them to look up and there be no one around. A more popular ghost sighting is of a young woman who reportedly died in a car accident. The woman’s ghost is wearing the same outfit the woman was wearing the day of her car crash. The caretaker’s home is even said to be haunted, due to reports of doors opening and lights turning on when no one was home.

For those looking to combine of ghost hunting and celebrity sighting Oak Hill is the cemetery for you.

A large Victorian home located on Laveta Place was declared legally haunted in 1991 in the landmark case Stambovsky v. Ackley.  Ackley had reported for years to newspapers, magazines, and other residents of Nyack that her house was haunted. She said she would wake up every morning from a ghost shaking her bed. Other ghosts would leave gifts such as rings around the house.

When Stambovsky bought the home, Ackley never told him that it was haunted. He demanded to sell the house back, and took Ackley to court. The case went all the way to New York’s Supreme Court, where it was declared that a seller should inform a buyer if their house is haunted. Interestingly enough, the issue of the case was never whether the house was haunted or not. 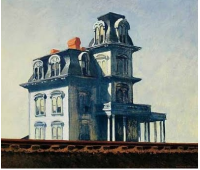 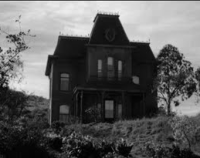 A painting by acclaimed artist and Nyack native son Edward Hopper of a massive Victorian on 9W in Haverstraw titled ‘€œHouse by the Railroad’€ was the prototype for the creepiest property in cinema history.  You will notice that the building, which still stands in spooky splendor next to St. Peter’s Cemetery in Haverstraw, bears an uncanny resemblance to the mansion that lurks behind the Bates Motel in Alfred Hitchcock’s film, Psycho.  That’s because Hopper’s work came to the attention of the cast and crew of the horror classic.

Hopper’s oil on canvas image captures a feeling of isolation and alienation.  The painting seems to have inspired not only the design of the Bates Mansion in the 1960 production, but the mood of the film as well.  ‘€œPsycho might be the most Hopperesque of Hitchcock’s films,’€ says Joel Gunz from AlfredHitchcockGeek.com.

To learn more about your paranormal neighbors, pick up a copy of the Ghosts of Rockland County by local author and former research chemist turned Ghost Investigator, Linda Zimmerman.

In this article:Events, Nyack History