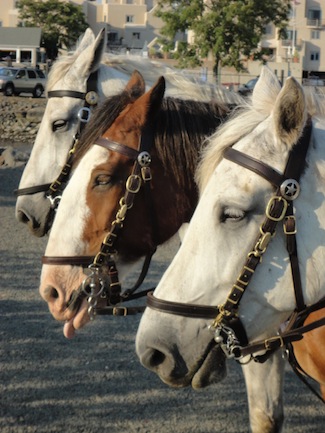 It’s all about APPLES on Sun Oct 14 from 12n-3p at the 2nd annual APPLE FEST at Memorial Park in Nyack. It’s a special opportunity to ‘€œMeet the Horses’€ of the Rockland County Sheriff’s Dept: Coughlin, Chipper, O’Grady and Paige. They welcome you to a photo op with every donation towards their medical emergency fund.

The Mounted Unit is very special to Nyack and Rockland County. Started back in 1962 with 30 officers and their own horses, the unit became full time in 1999 under Rockland County Sheriff James Kralik.

Memorial Park will be filled with live music including Jeffrey from the Bossy Frog Band, apple crafts, demos, horseshoe contest, a William Tell Nerf shooting contest, apple foods and treats, an Apple Pie baking contest, and everything APPLE! Please join us on Sun between 12n and 3p for AppleFest, produced by Friends of the Nyacks.

Paulette Ross is Chairwoman of Friends of The Nyacks.