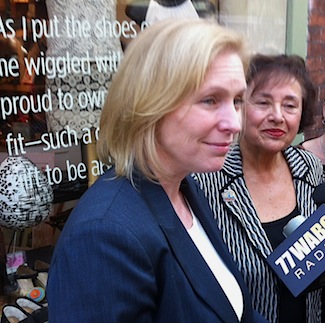 Nyack, Sept 3 ‘€“ On the last day of the Republican convention, there was an unheralded speech about jobs, small business and working across the aisle. Unlike many of the pro-business spiels during the convention week, there was no Democratic rebuttal. Which is probably because the message wasn’t delivered in Tampa by Republicans, but by a Democratic US Senator and Congressswoman in Nyack.

‘€œWhen we provide the tools that small business leaders need, we can help this economic engine take off,’€ said US Senator Kirsten Gillibrand (D-New York) to an audience of about 75 business owners, press and local politicians at the Maria Luisa Boutique in Nyack last Thursday.

Gillbrand was joined by Congresswoman Nita Lowey (D-Westchester/Rockland) to promote the Success Act, legislation that would encourage investments in small business stock, double the deduction for start-up expenses and continue tax breaks for spending on new equipment. ‘€œIt’s not a Republican idea. It’s not a Democratic idea. It’s just a good idea,’€ said Gillibrand. New York’s junior senator has been working with a bipartisan group of women senators to extend targeted small business tax benefits, which expired at the start of 2012, through at least 2013.

For the sake of our economy, we must put politics aside and pass the Success Act, so we can help grow our small businesses and create jobs today,” said Lowey. Accord to Gillibrand, the Success Act has bipartisan support, led by Senators Mary Landrieu (D-Louisiana) and Olympia Snowe (R-Maine).

Although the press conference received coverage in Cablevison’s Newsday, Gannett’s Journal News, AOL’s The Patch.com and WomenCentric.net, here are a few bullet points that didn’t make the Friday news.