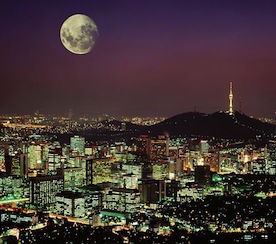 When I arrived in South Korea six months ago to begin my job as a Guest English Teacher, I had no idea what to expect. Although someone once told me that this country, about the size of Colorado, is Western enough to qualify as the 51st State, is filled with contradictions and striking cultural differences.

Koreans have a different standard for personal space that can be a little unsettling for Americans. For example, I get bumped into and shoved on a regular basis. It’s not considered rude to shove and elbow your way around the subway or in public in general. It’s odd, because generally speaking Koreans are extremely nice and helpful. In fact, on one occasion when I was trying to find a post office, a lady went out of her way to walk me to the building personally. At first this was confusing and annoying; now, it’s a lovable and laughable.

In many ways Korea is at the forefront of economics and technology ‘€“ with one baffling exception. South Korea, home to multi-national companies like LG, Samsung and Hyundai, boasts the world’s first completely digital grocery store in Seoul. And not far from where I live, there’s a state of the art phone charging station located in the subway: you run in place to generate the energy needed to charge your phone. But the high tech you can see doesn’t extend to the urban infrastructure you can’t. Seoul’s sewer system is so wimpy you can’t flush toilet paper down the drain. Instead, you throw the used toilet paper in a waste basket, a quaint custom that hardly seems cutting edge.

There are a few closely held local beliefs in Korean society that make no sense to Americans. My favorite is the fear of night fans. Many believe that if you leave a fan on at night time in your apartment without opening a window, you will die. South Korea is the only country citing fans as a cause of death. In 2006 the Korea Consumer Protection Board even released a warning to public, stating ‘€œasphyxiation from electric fans and air conditioners was among South Korea’s five most common seasonal summer accidents or injuries.’€ For such a technologically advanced and a just plain smart group of people, it always cracks me up that so many Koreans share this belief. The fan in my apartment has a timer on it ensuring it only will run half the night. I often wake up at 4am in a sweat and have to turn the fan back on again.

Looking good is important to Koreans, so much so, that most people who can afford it are likely to get plastic surgery during their lifetime. Korean’s are very self-conscious of beauty and body image: The Economist reports that South Korea is the most cosmetically enhanced nation in the world (the US is 6th). It’s not uncommon to hear one of my Korean coworkers at school discussing what types of plastic surgery their daughter will need when she nears high school.

Ironically, this commitment to looking healthy doesn’t extend to being healthy. Most people avoid any kind of physical exertion, including taking the bus instead of walking five minutes to a destination.

Becca Blazak is an at Ithaca College graduate who is teaching English in South Korea. Her previous article for NyackNewsAndViews, Fearing Frackingstein, discussed the arguments for and against hydro-fracking.