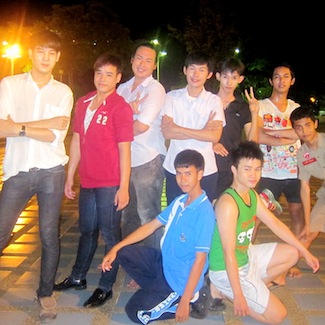 By day, Thung Si Mueng may appear as any old standard park in Northeast Thailand, but by night, it transforms into the ultimate high school hang out. There’s a public fitness center, an aerobics classroom as well as badminton, soccer and basketball courts. It’s a place for families to go that don’t have a backyard. There’s also a shop for a food vendor, an obstacle course for skateboarders and bikers to hone their tricks and even a performers’ rehearsal space. It’s also a place for those of us with nothing better to do to take in some evening entertainment.

Among this eclectic crowd of nightly park attendees is “The Beat Generation,” a group of nine gay men who gather outside of the park temple to rehearse a modern hip-hop dance routine. They are talented, flamboyant and quite proud.

After enjoying their routine and speaking with the friendly members, my farang friends and I tried to imagine how “The Beat Generation” would go over in one of our hometowns. I’m sure they would get a lot of attention in my home state of Arizona, much of it unflattering and unwanted. My South African pals regretfully admit the dancers would serve as provocation for the many intolerant citizens of their country.

However, at Thung Si Mueng, no one seems to notice, except for those who pause long enough to admire the moves of The Beat Generation. With the high value placed on skin color in Thailand,  the country has its own list of discrimination issues, however, it is refreshingly gay-friendly. Being gay in Thailand isn’t just a matter of being “accepted” by society. In Thailand, sexuality exists as it should in any culture – it’s merely a matter of personal preference received without judgment.

As an American teaching English in Thai schools, it’s interesting to watch the dynamic between homosexual and heterosexual students. While it’s often difficult for Americans to “come out” during their school years,  Thai children who recognize they’re gay early on have nothing to hide. There is no shame for themselves nor hatred from their peers.

Thailand is often associated with “ladyboys,” or transgendered males that live as females (also prevalent are females living as males known as ‘€œtomboys’€). While there are many gay boys and girls in Thailand, seemingly a huge number voluntarily change their sex. It was theorized to me that their innate Buddhist morals teach these individuals they were meant to be born as the opposite sex, and therefore take it upon themselves to alter their unlucky fate. I have had “ladyboy” students as young as 13 in my classes who have made the decision to become a girl (or at least practice living as one before they make it official).

In Thailand, public displays of affection are frowned upon for both straight and gay couples. However, it’s not unusual to see friends being overly affectionate in public. Straight girl friends of all ages hold hands in public and straight high school boys lay on each other, sit on each others’ laps and touch one another in ways that would have American high school boys running for the door.

It is only natural for human beings to crave physical connection with others. In a society that frowns upon public affection with a significant other, outwardly physical friendships have become the norm. Perhaps their immunity towards affection of same-sex friends has shaped an environment in which all people can connect with who ever they choose without judgment.

Growing up in the West, I did not know that it was possible for sexuality to be treated with such indifference. Certainly, America has made commendable progress in terms of gay rights, but there is a long road ahead.

Far from frequently intolerant Arizona, I’ve discovered a country where everyone can live peacefully regardless of sexual preference. Hats off to Thailand. But it’s by no means a perfect society:  among the older generation and in certain professions, you’ll still find sexual discrimination. To me, this has been nearly unnoticeable and the ‘€œdon’t ask, don’t tell’€ position that even those less accepting employ makes for a much more agreeable society.

Andrea Eisinberg is a recent Ithaca College graduate who has spent the last 10 months living in Thailand teaching English in an attempt to nurture and fund her travel disease. You can read more of her stories at StoriesFromTheEast.blogspot.com.