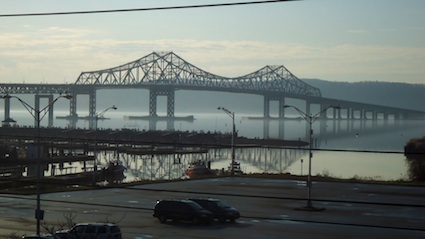 Nyack, August 7 ‘€“ The process to rebuild the Tappan Zee Bridge brought the spirit of summer stock to Nyack on Tuesday night, full of complex characters and memorable performances.   If you haven’t seen this show before (presented over the last nine years as public meetings), the new production might bring you to tears or cheers depending on how close your seats are to the construction site.

The troupe included almost all new faces and new state management ‘€“ acting as understudy for the governor. Although the script is mostly unchanged, the 2011 ‘€œTappan Zee Bridge/I-287 Corridor’€ production has been reborn as the ‘€œTappan Zee Hudson River Crossing Project.’€

Where previously this performance was given in larger venues, this week’s show was in the smaller meeting room of the Nyack Library, where a filled-to-capacity crowd of 85 sat and watched the infrastructure follies. One of the newest cast members is Brian Conybeare, who joins the troupe after previously working on TV. He plays the role of moderator, which is sort of an homage to the stage manager role in Our Town. Mr. Conybeare provided a credible performance as an ex-TV newscaster now serving as a liaison to the governor.

Thomas Madison, another 2012 addition, appeared as the executive director of the NYS Thruway, a role he delivered with great authority.

The star of the show was Larry Schwartz, a former Deputy County Executive from Westchester who plays the role of ‘€œsecretary to the governor.’€ Despite his intentionally less polished style when compared to the rest of the cast, Schwartz uses his stage presence to connect with the audience, once again proving that there are no small parts on (South) Broadway. In particular, the crowd enjoyed his monolouge about spending years stuck in Tappan Zee Bridge traffic as well as his description of the current bridge as a ‘€œbucket of rusty bolts.’€

The most surprising member of the cast was Mark Roche, who is a holdover and a veteran Tappan Zee Bridge performer. Roche, who reprised his role as The Engineer, actually is an accomplished bridge builder, which added a certain Reality TV credibility to the production.

The audience was somewhat stunned to hear Mr. Roche’s soliloquy, delivered with charming wit and a slight Irish accent, on why ‘€œBus Reliable Transit’€ was indeed important despite it being dropped from the second act of the current bridge drama. Although some in the audience were impressed by his rationale that ‘€œyou’d have to cut into the Palisades or move 31 miles of the current highway to the left and the right,’€ there were still others who didn’t seem to hear what he had to say. Which is possible, because many of the attendees were in the habit of turning down their hearing aids when they have seen the show before.

More than any of the other performers, Mr. Roche spoke to both the audience in the room and the fish in the river.  His description of a bubble cushion, designed to protect aquatic life, was almost poetic. ‘€œThere will be a series of pipes around the pilings, blowing a cushion of bubbles from the bottom up to cushion the fish from the noise.’€ Who knew that modern engineering could be made to sound so romantic?

Still, despite the great performances, many attendees went away disappointed, feeling like this revival is just more of the same. One member of the audience groused that the public needed an ombudsman to make sure they would get their money’s worth from future performances. Another wanted to know why this show didn’t have federal funding to hold down the projected $14 price of admission in 2016.

The traveling Tappan Zee troupe is next scheduled to appear on Thurs Aug 9 at the Sound Shore Communities Meeting Room at the Rye Library. Funds for this program are provided by the New York State Thruway Authority, The Governor’s Office and the tax dollars of People Like You.