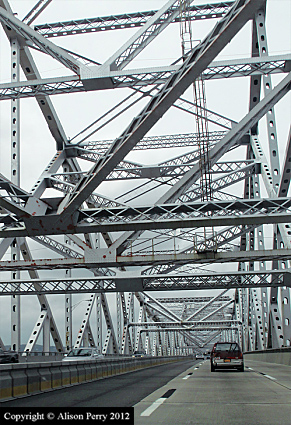 Nyack, August 17 –If fictional super agent Jerry Maguire were to star in the Tappan Zee Bridge story, we would now be up to the scene where Cuba Gooding, Jr bursts into the room and shouts, “show me the money!”

On Thursday, three Lower Hudson Valley county executives who could have blocked the project gave it a green light. Now the last remaining unknown is figuring out how to pay for the new twin span bridge.  Rockland’s Scott Vanderhoef, Westchester’s Rob Astorino and Putnam’s MaryEllen Odell announced they will vote yes on including the Tappan Zee Bridge project in the region’s long-range transportation plan at the next New York Metropolitan Transportation Council (NYMTC) meeting.

The three Republican County Executives announced their support for Democratic Governor Andrew Cuomo’s plan after the governor agreed to the following concessions:

“A firm commitment from Governor Cuomo’s office for dedicated bus lanes on the span from day one is a real victory that will improve commutes for bus riders and drivers from the day the bridge opens,” said Veronica Vanterpool, Executive Director of the Tri-State Transportation Campaign. “But without additional measures for bus rapid transit in the future, the bus lanes themselves will do little to address the mobility needs of the I-287 corridor. This initial investment shows that the governor’s office has moved beyond the rhetoric of ‘€œtransit-readiness’€ to a concrete transit provision.”

“I am pleased to join with the governor and my fellow county executives in this important TZ Bridge agreement which outlines steps for constructing a mass-transit ready structure, as well as committing to moving forward in the future to address the region’s  mass transit needs,” said Vanderhoef. “Under the framework we announce today, mass transit will not be an afterthought in the building of the bridge,” said Astorino. With plans to have mass transit as part of the new Tappan Zee Bridge we’re not waiting five years to start thinking about it, we’re moving forward now.’€

What’s still missing is the money. Albany needs to find a partner willing to lend the New York State Thruway Authority $5.2 billion to build a new bridge. Without any federal funding available, industry experts — as well as the Governor’s own spokesperson — had predicted new Tappan Zee tolls would be $14-16. But last week, Cuomo reversed himself and said that toll was too high and that he was creating a task force of Thruway, state, federal and local officials to find ways to keep tolls to a minimum.

It’s not clear what this task force will recommend that hasn’t already been considered. A public/private partnership was discussed earlier in the project but subsequently rejected. Cuomo once joked that he was open to any creative financing,  including holding bake sales to pay for the bridge. Could naming rights, car washes and lemonade stands be next on the agenda?