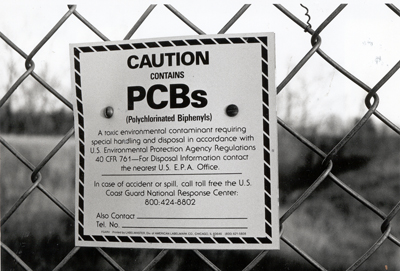 Eating fish from the Hudson River was once safe and healthy. But according to the EPA, that’s no longer the case: you might get cancer.

From the 1940s until 1977, the General Electric Company discharged 1.3 million pounds of the chemical PCB into the Hudson from its manufacturing centers in Hudson Falls and Fort Edward, NY. PCBs were banned in 1977 by the Clean Water Act. In 1983, the Environmental Protection Agency declared the entire Hudson, from Hudson Falls to New York City to be a Superfund site in dire need of cleanup, becoming one of the largest Superfund sites in the country. In the late 1990s the EPA declared that PCBs are probably carcinogenic.

GE has repeatedly claimed that PCBs pose no risk to humans and that the river is growing steadily cleaner by itself. GE heavily lobbied the New York State Legislature to make this issue go away and state officials excused GE from the consequences of their pollution. GE, however, was eventually forced to address the problem, overseeing the cleansing of 2.5 million cubic yards of PCB contaminated sediment.

There is strong evidence of the harmful effects of PCBs. According to the EPA, ‘€œPCBs cause cancer in laboratory animals, are considered a probable cause of cancer in people, and can trigger serious health problems, including low birth weight and reproductive and immunological problems. Pregnant women and children are especially vulnerable.’€

There have been several warnings put out in the area by the EPA and other organizations that eating fish from the Hudson can be harmful. The EPA claims, ‘€œWomen of childbearing age and children under age 15 should not eat any fish from the Hudson River. No one should eat fish caught between the Federal Dam at Troy and Hudson Falls.’€

Furthermore, the New York Department of Health lists certain areas, such as from the dam at the Route 9 Bridge in South Glens Falls to Bakers Falls, where no fish are safe to eat. In 1976, the New York State Department of Environmental Conservation banned all fishing in the Upper Hudson because of health concerns from PCB pollution. However, recreational fishermen continue to consume their catches, often unaware of the risks.

Based on an EPA study published in the New York Times, ‘€œ’€¦someone who eats fish from the part of the Hudson north of Troy once a week for 40 years would face a one in 1,000 chance of getting cancer as a result, 10 times the maximum risk level it considers acceptable.’€

According to the EPA, PCBs are simply not going away as the Hudson River is not cleaning itself. They are in the sediment and not safely buried, making them easy to move throughout the river.

In addition to the remaining presence of PCBs, other human actions are hurting the Hudson. ‘€œIn all cases, fisheries have been lost because of human mismanagement. That’s key,” says Riverkeeper patrol boat captain John Libscomb. “Whether we caused the pollution or the decline of population, it’s all caused by humans. Overfishing in the estuaries of the Hudson has been damaging.’€ Lipscomb says several species of fish have died out leaving just a few unhealthy fish.

The pollution and other damaging acts have impacted different species in very different ways. According to Lipscomb, ‘€œPollution has affected commercial fishing in a big way, but it’s species specific. In other words, it would not be accurate to say that pollution has affected all commercial fisheries on the Hudson. For certain species like striped bass and American eel, pollution has been detrimental because those fish bioaccumulate PCBs. Other species which used to be fished commercially, such as sturgeon and shad, those fisheries are also closed, but not because of pollution. They are closed because of extreme population decline of those species, and the population decline is again at the hand of man. But instead of being pollution, habitat loss is due to development, overfishing, part of it no doubt is contamination, but most of it is overharvest and loss of habitat due to human development.’€

As recently as August 8, a sewage line break in Tarrytown led to an advisory telling people to avoid contact with the river.

Even after the ban on PCBs, the fishing industry could barely recover. ‘€œAfter the Clean Water Act, the public sees less visible pollution,” said Lipscomb. “There were more fish then than recently. It’s evidence that pollution is only one of the factors we have to consider. We all live next to this big, beautiful river’€¦and it’s grand on a physical scale. And the thing that people forget is that until the industrial age, until Europeans showed up, the Hudson was just fine, and the last thing you had to do was think about caring for it. But we have come in with our industry and our huge population growth and the sewage and waste water issues that come with that and we come in with sophisticated fishing equipment offshore and inshore, and the river is now much diminished than what the Europeans came across when it was discovered. It’s still grand, but it’s a shadow of what it was 100 years ago. And the important thing to think about is that the river that needed no care before the Europeans came now needs a great amount of care. It suffered and continues to suffer at our hands’€¦it needs protection now that we’re here.’€

John Lipscomb’s dream is to one day have the estuaries of the Hudson be declared fish sanctuaries, as the various species are ‘€œcritical components of the greater ecosystem.’€ The state of the Hudson is a sad commentary of how humans continue to harm their natural resources.

Pollution, pollution
They got smog and sewage and mud
Turn on your tap
And get hot and cold running crud

Pollution, pollution
You can use the latest toothpaste
And then rinse your mouth
With industrial waste

Just go out for a breath of air
And you’ll be ready for Medicare
The city streets are really quite a thrill
If the hoods don’t get you, the monoxide will

Pollution, pollution
Wear a gas mask and a veil
Then you can breathe
Long as you don’t inhale

So go to the city
See the crazy people there
Like lambs to the slaughter
They’re drinking the water
And breathing, (cough!)  the air