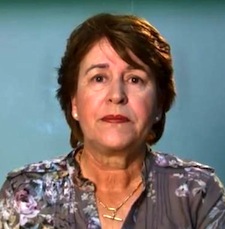 Munich 11 widow Ankie Spitzer will hold a minute of silence to commemorate the 40th anniversary of the Munich Massacre during the opening ceremony of JCC Rockland’s Maccabi Games on August 12. The minute will take place worldwide in real time via social media.

Spitzer, along with widow Ilana Romano and the other Munich families along with the JCC, vow to press on for a minute of silence at the Rio de Janeiro games in 2016. The petition will remain live at www.change.org.

Spitzer has lobbied the International Olympic Committee (IOC) for a minute to recognize the tragedy that took place during the 1972 Olympics when her husband Andrei and 10 other members of the Israeli delegation to the XX Olympiad were taken hostage and murdered by Palestinian terrorists. The IOC has refused since the Montreal Olympics in 1976 to hold a minute of silence in their memory or to even recognize them officially during the Olympic opening ceremony.

Sportscaster Bob Costas held his own minute of silence during NBC’s broadcast of the opening ceremonies of the XXX Olympiad last week. “These games mark the 40th anniversary of the 1972 tragedy in Munich, when 11 Israeli coaches and athletes were murdered by Palestinian terrorists,” Costas said. “There have been calls from a number of quarters for the IOC to acknowledge that with a moment of silence at some point in tonight’s ceremony. The IOC denied that request, noting it had honored the victims on other occasions.” Costas conceded that although IOC President Jacques Rogge held a moment of silence in the Olympic Village prior to the opening ceremonies, that gesture didn’t go far enough. “For many, tonight, with the world watching, is the true time and place to remember those who were lost, and how and why they died.’€

The IOC refused to hold a silent minute at the opening of the 2012 London Summer Olympics despite worldwide pressure that included more than 110,000 signatories to a JCC online petition from 150+ countries,  support from President Barack Obama, former Governor Mitt Romney, the U.S. Senate and the governments of Israel, Great Britain, Canada, Australia, Germany, Belgium and Italy.

The JCC has stood in solidarity with Spitzer and the Munich 11 families for two years, forging a relationship to bring attention and redress to this 40-year-old issue. The JCC minute of silence will be held on Sunday, Aug. 12 between the hours of 8-9p and will be livestreamed from JCCRockland.org.

Advertisement. Scroll to continue reading.
In this article:Events, Rockland County