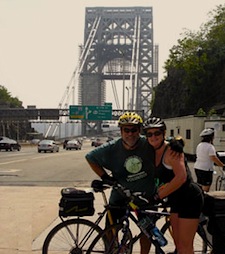 Bikers pause for a picture at the George Washington Bridge during the last leg of the annual six day Great Hudson Pedal from Albany to New York City.

Nyack, Aug 4 — On a busy Summer weekend, as many as 5,000 bikers will ride the roads North from NYC and NJ to Nyack. This weekend, there will be an additional 150 heading to Nyack — from Albany. They are part of the Great Hudson Pedal, an annual six day, 200 mile cycling event from Albany to New York City. Nyack Beach State Park is their last stop and camping location before the ride ends on Sunday afternoon at Battery Park in NYC.

Twenty states are represented during the 8th annual ride which connects cyclists with historical sites and local communities in the Hudson River Valley. The event is organized by Parks and Trails New York, a statewide not-for-profit organization working to create a network of parks, trails and open space across the Empire State. PTNY also sponsors an eight day, 400 mile ride following the Erie Canal from Buffalo to Albany each July.

The riders start their Saturday in Garrison, NY and pedal South to Nyack arriving in the early afternoon. After pitching their tents on the upper plateau in Nyack Beach State Park, a shuttle bus will be available to bring them into the village between 2-5p. Early Sunday morning, the group will break camp and begin the ride South to the tip of Manhattan crossing the Hudson at the George Washington Bridge.