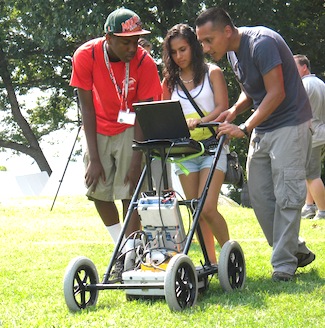 In 1956, bones were found protruding from a hillside in Stony Point, NY. It wasn’t the crime of the century in this sleepy historic town but casualties from a battle fought more than two centuries ago. Excavation determined that the bones belonged to two British soldiers who died during the Battle of Stony Point, a sneak attack orchestrated by General George Washington and led by General Anthony Wayne that gave a decisive victory to the Continental Army during the Revolutionary War in July 1779. Where the other 40 soldiers who fell in battle that day were buried is still a mystery after 56 years.

Last week, 12 high school students from Newark, NJ attempted to find those missing 18th century graves using 21st century technology. Radio waves from Ground Penetrating Radar (GPR), a device that looks like a lawn mower and is wheeled over the survey area, are used to probe the soil to a depth of 5-10 feet. The structure of the underlying soil is displayed on a computer monitor like a CAT scan of the earth. With a little training, the students can learn to interpret the data and identify buried features.

After laying out measured grids, teams of students took turns pushing the GPR over the flat areas with good soil where graves could be easily dug. Despite the 90 degree temperatures, they eagerly discussed and interpreted the data they collected and marked locations of possible graves with small orange flags. Within a few hours, the lawns had numerous flags on them. Clusters of flags indicated locations of possible multiple graves. Three of these were found right around the Stony Point Battlefield Museum. The students were thrilled that they could apply science that they learned in a classroom to solving a real historical problem. Many commented that they wished all their classes could be conducted in this manner. The experience reinforced the resolve of these urban students to become scientists despite the social pressures and economic burdens that they were facing at home. For many, the experience was transformative. 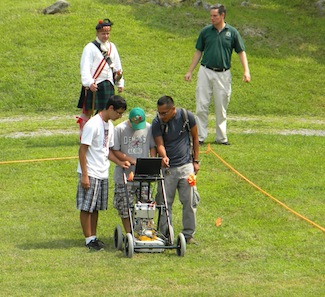 Led by graduate student Michael Bastidas, Newark Public School teacher Mohammed Kabbani, Project Coordinator Michael Kalczynski and me, the 12 students completed their field work on this project on August 17 at Stony Point Battlefield State Historic Site. It’s important work with implications for the past and the future. The Geosciences are literally the worst discipline in terms of diversity and this project addresses that shortcoming by showing students the interesting and practical applications. This year, the Summer institute had 90 participants with the 12 most enthusiastic of the students taking part in this special experience.

We packed up the equipment at the end of the day and left our findings behind with the museum staff. It will take a decision by the New York State archeologist as to whether any of the identified locations will be excavated and to prove whether the students located graves or not. By then, the students will be back in Newark at school and home far from the surveying they did. Certainly, they will keep a small memory of the day at the Stony Point Battlefield and hopefully it will help them to keep their focus on science and achieving success in their lives.

Dr. Alexander E. Gates, Vice Chancellor for Research at Rutgers University, specializes in fault activity and tectonics of the Appalachians. He is the author of several books on earthquakes and volcanoes and pollution as well as about 60 professional papers. He has appeared on several documentaries including two by Discovery Channel as well as numerous local television and radio news programs whenever there is an earthquake.

Dr. Gates program to get more minority students interested in the Geosciences is now in its 6th year, funded by the National Science Foundation with additional support from ExxonMobil and collaboratorion from Kean University and the Newark Museum. The program has several parts including academic year classroom enrichment activities, an afterschool program (GeoExplorers), an annual science festival at the Newark Museum (Dinosaur Day) and a Summer Scholars Institute.