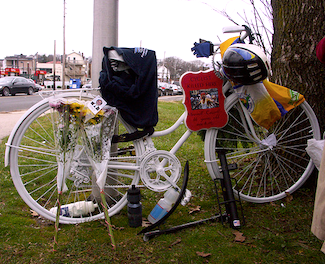 Ghost Bike Memorial for cycling advocate Merrill Cassell, dedicated on what would have been his 67th birthday. Cassell was run over by a Bee-line bus in Nov 2009. The NYS Safe Distance (aka 3 foot law) was named “Merrill’s Law” in his honor. Photo Credit: East Coast Greenway via flickr

How is it that cyclists are being hit by cars and killed and motorists are not being charged?

Recently two cyclists hit by cars in the area, have died after being struck from behind. On June 10th, Janet Martinez was killed while riding in Orangetown. Two weeks later Luis Chispon was riding home after work in Sleepy Hollow was run over and killed. Neither driver, Denise Patawaran – who struck Martinez, or Carlos Loja – who struck Chison, have been charged.

When Merrill Cassel was run over by a Bee-Line Bus in Greenburgh, NY in 2009, the driver was not charged in his death. This resulted in Assemblywoman Amy Paulin and State Senator Andrea Stewart-Cousin banding together to pass the safe passing law in New York, which took effect November 2010. Merrill’s Law mandates motorists must pass cyclists with a safe distance; three feet is recommended. I wonder if any drivers have been charged under the safe passing law?

Why are police and prosecutors not charging motorists for accidents like this and holding them accountable? So often the statements by the authorities and the reporting hint that the rider is at fault, a rider who cannot defend themselves. Bottom line is that often motorists who kill cyclists with their vehicles are rarely charged.

The new Federal Transportation Bill unfortunately lowered funds to establish safer roads for pedestrians and cyclists by over 60 percent.

Please write your elected officials to encourage enforcement of “Merrill’s Law” and designing safer roadways to encourage walking and riding.

Photojournalist and avid cyclist Randall Wolf edited the Journal News’ cycling.lohudblogs.com from 2008 through 2010. He’s logged more than 100,000 road miles over the past 40 years and has raced as a Master/Category 3 amateur and worked at pro cycling events and charity rides.