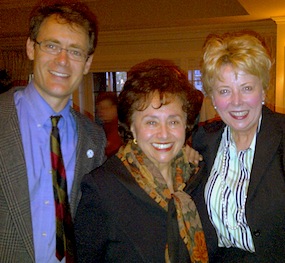 When members of the 112th Congress take their seats next January, Rockland County will have a new representative. Regardless of the outcome of this November’s general election, Eliot Engel will no longer represent Rockland because New York’s congressional districts were redrawn following the 2012 Census.

While a switch in representation can sometimes be unsettling for both constituents and politicians, this is likely to be a smooth transition for Lowey and Rockland. Engel and Lowey have extremely similar voting records. Both are Jewish Democrats who became representatives in 1988. They were even both born in the Bronx, ten years apart. They are both passionate about gay marriage rights, gender equality, and affordable health care. According to the Washington Post, Lowey votes 96% with the Democratic Party and Engel votes 94%.

In the past few months, Engel and Lowey have been working closely together on a resolution to hold a minute of silence at this Summer’s Olympic Games in honor of the Israeli athletes and coaches that died in the 1972 Olympics. It will be the 40th anniversary of the tragedy. Despite recent support from everyone from Sports Broadcaster Bob Costas to President Barrack Obama, the International Olympic Committee (IOC) has refused to observe the moment of silence. Costas says he will observe his own on-air moment of silence while covering the Olympic Games.

Although Engel has been a major problem-solver in Rockland and has been successful in bring funding for local projects back from Washington, Lowey’s brings some important credentials of her own as a senior position on the House Appropriations committee, arguably one of the most powerful committees in Congress .