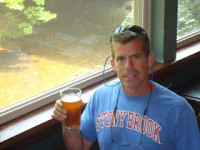 There is a movement afoot in bars all over America.  Where, a few years ago, you would see three or four taps of the familiar Bud or Miller Lite, now they have multiplied.  Now, you might see a dozen or so handles in all kinds of shapes and sizes: sharks, spoked wheels, and skeletons.  These taps (or faucets as they are called in the industry) pour craft beer from Dogfish Head, Magic Hat and Rouge Brewery respectively.  Though not household names yet, these craft or microbreweries are slowly making inroads into a beer market dominated by just a few players.

A craft brewery is small, traditional and independent.  Of the 2000 breweries in the US,  over 90% of them would be classified as craft brewers.  According to the American Brewers Association an American craft brewer is:

Author of  Tri-State Beer blog, Mike Fitzgerald is a high school science teacher in Nanuet who has studied the different hops, yeast strains and recipes that go into making craft beers. He and his wife have been on their own personal “beer odyssey” over the last few years visiting breweries, craft beer stores, bars and festivals. They will open their own craft beer store, Growler and Gill, in Nanuet in the near future. To find out more about their progress, visit the Growler and Gill Kickstarter page.