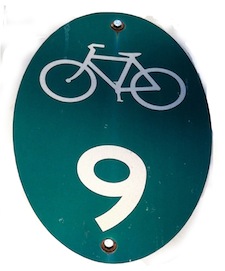 In the early 2000s I was a young cyclist who used to ride up to Piermont and Nyack from Brooklyn for fun and exercise and also because it was such a beautiful and challenging ride. In 2003 my husband and I, remembering how nice it was up here, bought our house on Route 9w in Piermont.

On Tuesday, June 26, I attended a regularly scheduled town hall meeting in Orangetown, NY. I was not there to speak about tree removal or parking issues, I was there to support the family of Janet Martinez who was tragically killed on Sunday, June 10th while riding her bike south on Route 9w. She was struck from behind by a car that was also traveling South.

Sadly we live very close to where Ms. Martinez was killed. As a cyclist and a driver who has lived in Piermont for 9 years I can say that what I see everyday on Route 9w is terrifying.

As a driver I see cars traveling 10, 15, 20 miles over the speed limit; I am tailgated everyday, especially at rush hour; I have been passed, honked at, yelled at, drivers flash their lights at me, all, presumably because I am going too slow. The speed limit on the stretch of 9w between Piermont and South Nyack is 40 miles per hour.

As a cyclist I won’t ride on 9w —  it is just too dangerous. But I see other cyclists ride on that route all the time. It’s a short, narrow stretch through Upper Grandview between South Nyack which has little or no shoulder. Where there is a shoulder it is 1-2′ wide and covered in debris. I have seen cyclists ride 2 or 3 abreast, I have seen large, colorful pelotons riding up 9w making it nearly impossible to safely pass them in my car.

The operator of a vehicle overtaking, from behind, a bicycle proceeding on the same side of a roadway shall pass to the left of such bicycle at a safe distance until safely clear thereof.
* NB Effective November 1, 2010

I have heard the proposal to ban cyclists from riding on the section of Route 9w through Piermont, Grandview and South Nyack. This, however, is not a good solution. Riding up from the George Washington Bridge, up through Piermont and Nyack, to Bear Mountain is a long established and well loved bike route. Lance Armstrong has ridden this route, cyclists come up every day, every weekend, to enjoy the views, to enjoy our towns, and to experience a very intense and challenging bike ride.

What we need to do is make our roads safer and also to inform cyclists and drivers what they will experience when they ride on our roads, and what they will find when they enter our towns. I understand the frustration of my fellow residents towards the cyclists: they clog the roads, they crowd our sidewalks, they can often be disrespectful to the people who live in our towns who just want to go to a local cafÃ©, or to the shops, farmer’s markets and parks. I cringe when I see a fellow cyclist yelling at a pedestrian for getting in their way, or when I see cyclists blow through stop signs and stop lights causing perilous conditions in already tight and dangerous intersections. I cringe because as a cyclist I know that for the few bad apples there are hundreds of us who want to follow the rules and don’t want to cause trouble.

I am frustrated by the behavior of both the drivers and the cyclists that go through our towns. Why do they act this way? Why is their behavior unchecked? The routes through our little towns are not patrolled enough by the police. There are not enough police officers out there forcing people to slow down, enforcing the rules of the road. Drivers speed and cyclists don’t ride single file because no one is stopping them. We need to make a concerted effort to educate the drivers and cyclists who come through our towns and to enforce the rules of the road that are already in place. A way we can do this is through larger signs on the roads: these signs should clearly state the speed limit for cars; we need many large signs that say riding in groups is against the law; we need signs that recommend cyclists detour from Route 9w and onto the safer, and slower, Piermont Avenue. We need police officers out there to enforce these rules. We need to ticket people who break our laws. Driving and riding through Piermont, Grandview and Nyack is a privilege and should be treated that way. If we don’t make a sustained and concerted enforce our rules, if we don’t inform the people who come through our towns that we are serious about safety, we will have more tragedies.

Kristi Norgaard is an avid cyclist who lives in Piermont, NY.