On June 14, I was invited to join the Flash Sketch Mob that was gathering in Nyack, NY that weekend.  The problem is that I don’t use my pen to draw: I’m a poet.

When I was asked to participate in the “Flash Sketch Mob,” I was thrilled and confused. I thought “what was I supposed to do?”  Should I draw my location with actual words? Should the picture be of the space with words in it? Should I just write and see what happens? All of these questions went through my head.

As I walked down to the Nyack Center I thought, I am just going to go with the flow and see what happens; see where my pen and pad takes me. When I got through registration and opened my packet something interesting happened. In the packet each participant was given a picture of where they were to go when the bell sounded. Once I looked at the picture I already knew what the first three words of the writing that I was about to write were.

Visually when poets write, sometimes they draw from the things that are right in front of them. Artistically it is our job as writer’s to then connect the reader to the bigger image that we ‘€œas writers’€ are trying to convey while also allowing the reader to create their own images. It’s a duality; a beauty.

Alas, as the bell gonged we all headed out. I sat in front of Pizza Bistro with my back to the Baptist Church in the shade. I took out my sharpie and had my writing pad.

The woman next to me asked “Are you an artist too?” I said, “Yes!” and began. Like with any writing- timing and mood are essential. I quickly glanced at the building across the street. Closed my eyes and took in the shaded breeze that day had to offer. Then it was like any other time I had sat down to write. Compelled to tell a story, share an image, capture the beauty that I saw, that I dug up- I wrote and wrote.

After about 10 minutes I knew I was done. I looked around and noticed others were just getting started! Setting up easels, making sure they had all their paints, pencils and brushes… And here I was finished.

I hesitated to leave so quickly- but I knew that if I stayed any longer I may taint the poem I had just written. I never want to overwrite or keep writing when I am not “feeling” it. You see, writers know when something is done or even when a piece needs to breathe; maybe later on it will take on a different revision or become something “new” completely.

Taking words and running them in between paint, pencil, ink was quite magical. As a writer, the only one who joined the mob, I am grateful for the inspiration and the poem I composed that day. 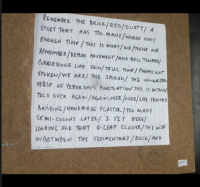 Remember the brick/ red/ dusty/ a story that has too many/ words not/ enough time/ this is what/ we/ think we remember/ before pavement/ and bell towers/ cobblestone like sin/ tells time/ poems not spoken/ we are/ the spoken/ the un-written verse of yesterday’s punctuation/ this is untold/ told over again/ again, over/ over/ like erected building/ handmade plaster/ too many semi-colons later/ I sit here/ looking for that 4-leaf clover/ the wish in between the sedimentary/ rock/ and top of sky/ sprouted with tree branches/ this reminds me of/ us/ her/ them/ the un-told story/ a love/ lost/ forgiven and re-found/ there is a love letter below the brick/ stamped/ waiting for/ you/ I/ go ahead/ open your eyes/ tell me/ what it speaks/ re-tell this/ differently

Diana Wilkins works for VCS Gay Pride Rockland and teaches part time at Dominican College. She has her MFA from Lesley University in Boston in Creative Writing Poetry and an MA from Queens College, CUNY. Even though she has been working in Rockland for five years, she recently moved to Nyack from Mount Vernon with her fiancee Melissa last October. Diana is an avid reader and writer of poetry. She has self published a dozen chap books. She also loves to fight for social justice and is active in creating change day by day.