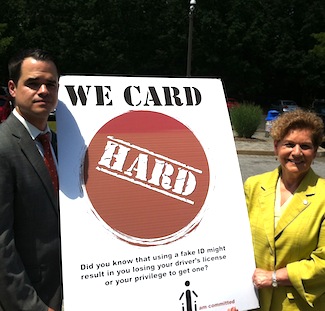 The Fourth of July is the second deadliest day of the entire year when more than 4 in 10 fatal crashes involve a drunk driver.  Since 2007, there have been 6,401 statewide recorded incidences of sales to minors, with 196 of them occurring in Rockland. Underage drinking is complemented by a surge in the amount of underage individuals that use fake IDs to buy alcohol at retail stores, bars and restaurants.

NYS Senator David Carlucci and Assemblywoman Ellen Jaffee joined law enforcement and local officials on day before Independence Day to highlight the problem of underage drinking. “Fake IDs are not only against the law, but they encourage bad behavior and result at times in tragic circumstances,” said Carlucci. ‘€œFake IDs are all too easy to get’€”and unfortunately some bars and liquor stores are not properly vigilant when it comes to checking IDs,” said Jaffee. “Beyond that, we all must take personal responsibility for preventing intoxicated people in our presence from driving,’€ she said.

Businesses and taxpayers are often left picking up the tab for the financial costs incurred.  In fact, New Yorkers paid to the tune of $3.5 billion dollars in 2007 alone, according to the Office of Alcoholism and Substance Abuse Services.  Fines levied by the State Liquor Authority against even the best acting businesses which sell to minors can cut into the bottom line of businesses statewide.

Seeking to counter this annual problem throughout the state, the New York State Card Hard Campaign initiative was created to help communities, businesses, and legislators better address the dangerous problem of underage drinking.

This campaign, which is a collective public-private partnership of elected officials and businessmen throughout New York State, includes a package of proposals that would:

“Through this innovative public-private partnership between government and businesses, we can begin to reduce the problem that plagues not only the lives of our youth, but also the costs it imposes on our businesses’ bottom line,’€ said Carlucci.