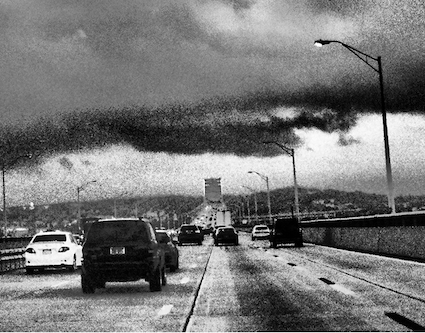 On Thursday, the Secretary to the Governor of New York and the Exec Dir of the NYS Thruway will hold early morning and early evening public meetings to discuss plans to build a new Tappan Zee Bridge.

I’ve been asking this question for a while. Remember that the Tappan Zee Bridge shouldn’t exist, and should be torn down and not rebuilt. But Andrew Cuomo wants to rebuild it, twice as big, and at a huge cost. Who is going to pay for it?

Remember: it has long been established that it is economically impossible to cover the budgeted cost of $5 billion through tolls. If everyone who crosses now paid $15-20 round trip we could do it, but when the tolls get that high, people start doing what they should be doing anyway: working close to home, living close to work, or taking transit. In the topsy-turvy world of road tolls this is a bad thing, because then total revenue declines and the Thruway can’t pay the bonds.

Charlie Komanoff has argued that the solution is just to build a smaller replacement bridge, but Cuomo seems to have decided that any plan that doesn’t double the width of the bridge is not big enough for his legacy. There’s a chance he’s expecting that the second span will be cancelled, but not until he’s safely elected President.

What’s more likely is that there will be some component that is directly paid for out of taxes, like the gas tax, the income tax or the sales tax. It will be paid by the Federal or New York State governments, but either way it will come primarily from people who don’t drive across the bridge – and from significant numbers of people who don’t drive at all. If we estimate that amount to be $1.4 billion, it will bring the tolls down to $10-12 round trip, as you can see in this modified version of Komanoff’s spreadsheet.

As long as the bridge is getting built, there will be some component paid by other taxes; the question is simply how much it will be. The smaller the toll increase, the bigger the share that will have to be borne by taxpayers. Right now, through his unofficial press secretary Fred Dicker, the Governor has signaled that any toll increase will be minimal.

The tabloids have stoked a fierce backlash against toll increases following the most recent Port Authority bridge toll hike. The Governor has been saying, “the bridge will be paid for with tolls,” but like his earlier insistence that he won’t raise taxes and that he’ll veto any redistricting bill that doesn’t include an independent commission, it’s pretty clear that this is just for show.

What is most disturbing is that, according to Dicker, Assembly Speaker Silver and Senate Minority Leader Skelos have come out against any Thruway toll hike. Silver thinks that more cars and trucks on the Thruway is good. Skelos wants government to be more efficient, but not so efficient that it doesn’t replace the bridge. These quotes are about a toll hike that’s independent of the bridge financing, aimed at keeping the highway solvent, and they’re against that. It’s possible that they could change their tune once it comes to paying for the bridge replacement, but it’s also possible that they’ll repeat these same platitudes.

If Silver and Skelos support rebuilding the bridge but oppose raising tolls to pay for it, and also oppose raising taxes (as Skelos at least is signaling), then there will have to be cuts in other things. I would actually love to see the Kosciuszko Bridge replacement cut, but I’m guessing it will probably be the transit budget that gets cut again. At which time expect to see Silver and Skelos’s minions like Hakeem Jeffries, Jeff Klein and Marty Golden come out with the usual protests against transit cuts and fare hikes, all the while decrying the waste at the MTA.

Cap’n Transit, who was born in New York and grew up in the Hudson Valley, West of the river, writes about mass transit in the NYC metro area at CapnTransit.Blogspot.com. He feels that eliminating government incentives for people to drive, and to help transit compete fairly we can ‘€œreduce disease, injury and death; improve energy efficiency; bring communities back together; and make access to work, shopping and entertainment fairer.’€