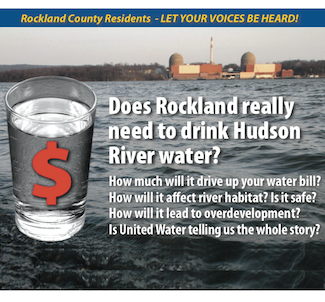 by the Rockland Water Coalition

Over 24,000 Rockland residents have signed petitions opposing United Water’s proposal to construct a desalination plant on the Hudson River for public drinking water. An overflow crowd of hundreds of people at Haverstraw Town Hall had to be turned away from the one public hearing on this proposal on March 6 due to lack of space. Key elected officials, including Harriet Cornell, the Chair of the Rockland County Legislature and Alden Wolfe, Chair of the Rockland Legislature Environmental Committee, have expressed concern about the real cost and need of desal and have urged the NYS DEC to carefully scrutinize all alternative options and conduct a 50-year accounting of United Water’s releases from Lake DeForest first.

Despite this clear and overwhelming opposition by Rockland residents, we are now hearing that Governor Andrew Cuomo may be pushing for approval of this proposal. We are hearing that a decision on desalination could be imminent. YOUR IMMEDIATE ACTION IS NEEDED!

It is urgent that you call Governor Cuomo today to tell him that ROCKLAND RESIDENTS SAY NO TO DESALINATION! Rockland ratepayers and taxpayers do not need to pay higher water costs and taxes for this United Water boondoggle!

As most Rockland residents already know, United Water wants to build a desalination plant for Rockland’s drinking water in Haverstraw Bay, one of the most richly productive and irreplaceable habitats on the Hudson River, located just 3.5 miles downstream from Indian Point, a leaking nuclear power plant. In 2007, United Water was fined for excessive transfers of fresh water from Lake DeForest to New Jersey. It is inevitable that these water transfers will increase if United Water puts the desalination plant on line for Rockland County. Under United Water’s plan, Rockland residents would pay even higher energy and water costs to drink Hudson River water while substantially increasing energy use and greenhouse gas emissions at a time when we urgently need to reduce our energy use to fight climate change.

It appears that Governor Cuomo is pushing for this plant because he thinks it will create jobs.

United Water’s ads are telling you that desalination will boost job creation. That’s what they tell the public. But in their environmental impact statement, United Water states that aside from temporary construction work, only TEN permanent jobs will be created. Ten jobs! Is it worth a permanent steep escalation in water rates to pay for ten permanent jobs? It will be Rockland residents who will PAY for these jobs. Rockland residents are already taxed enough!

If you are concerned about desalination, you must act now. It takes one minute to call Governor Cuomo’s office at (518) 474-8390 and you have the option of either leaving a recorded or message or speaking with a representative. You can also email him at gov.cuomo@chamber.state.ny.us to let him know that you oppose this desalination plant ‘€“ a misguided proposal that will lock Rockland County in permanently to the most expensive water treatment option of all. This is not the right way to create more jobs!

We can create far more long-term local jobs through green alternatives. Tell the governor to support sustainable alternatives, which willstrengthen our local and regional economy, create green jobs, protect Haverstraw Bay, and protect the character of our community.

Signed on behalf and in support of the Rockland Water Coalition: