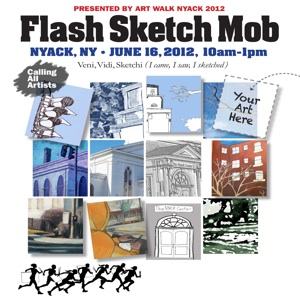 Nyack, June 16 — Organizer Bill Batson says there will be 220 hands on deck at the first of its kind Flash Sketch Mob today in Nyack. “We have 110 pre-registrants — that’s 220 hands!” he says. The actual number of artists who come to sketch may be higher as many of the participants say they will be bringing family members to participate as well. Artists will be spaced 12 paces apart on North and South Broadway in downtown Nyack. Flash Sketch Mob participants will tweet “color” commentary of the Sat morning arts action with the hashtag #FlashSketchMob on Twitter.

At 10a, Sketch Mob artists will gather at the Nyack Center to be assigned a specific location to sketch. Their completed works will be collected at 1p and then scanned for presentation later in the day. Batson will project the all artwork created during the Flash Sketch Mob on the wall adjacent to the Runcible Spoon Bakery at High Ave and N. Broadway in Nyack at 9:30p.

“What a great event! Bill has  such vision,” said Tappan artist Sue Barasi. “Once I heard about it , it spread like wild flowers!” Barasi says she helped recruit artists from Udelco in Orangeburg, “Artists in the Park” painters from Bear mountain and the artists in residency at Vytlacil in Sparkill fro the event. “Nyack is a unique place and we are documenting history,” sahe said. “I can’t wait to see the finished product!”

Like John Henry, I am at war with a machine. My antagonist is not a steam powered drill, but Google Maps. What my nemesis accomplishes through satellite surveillance and cars equipped with periscope cameras, I endeavor to create with my humble sketch pad and pen. Just like the hero of legend Henry, I will never, ultimately, outlast the machine. What I hope to do is to complete a visual record of every inch, object, vista and structure in my village that will remind us that handmade, no matter how slower, shakier or flawed, has a greater intrinsic value than the synthetic alternative.

The Flash Sketch Mob is more than public art in action; it’s a family affair, too. “My daughter and I agree that going to the Flash Mob is a fantastic, fun way to see our town with new eyes.” says Rachel Grob, who will be sketching with her daughter Talia. “Spending a Saturday morning running around Nyack with friends and neighbors, sketching favorite spots in the village and seeing what we can all create together – who gets to do this?  You bet we’ll be there, with bells (and pens!) on,” she said.

The event kicks off at 10a with a bull horn and a church bell. ‘€œNyack has a history of attracting great artists and supporting their work,’€ said Nyack Mayor Jen Laird-White, who will introduce the event with a bull horn at 10a preceding the peal of the church bell in the Nyack Center. ‘€œThe village that inspired Edward Hopper, Helen Hayes and Carson McCullers will now be the inspiration for a Flash Sketch Mob of contemporary artists.  That’s picture perfect!’€

The Flash Sketch Mob is part of the 2012 Art Walk, an event where art meets commerce with more than 20 Nyack stores turned into temporary art galleries throughout the weekend.