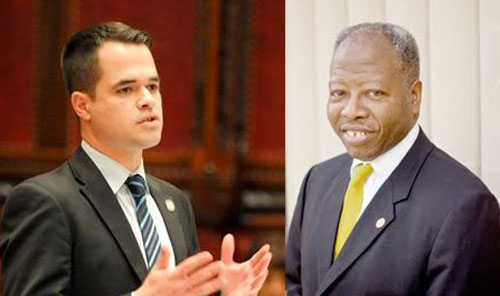 Grant Valentine, who ran for State Senate two years ago but failed to secure enough petition signatures to get his name on the ballot, is again challenging NYS Senator David Carlucci for the Democratic nomination. Carlucci went on to be the Democratic nominee and defeated Rockland County Executive C. Scott Vanderhoef, a Republican, for the open seat in 2010.

In the past months, David has voted down an amendment which would have raised the minimum wage for over a million New York families, and he has flip-flopped on our local sales tax issue which will lead to layoffs for some families here in Rockland County. Worst of all, David broke his promise ‘€“ his written pledge ‘€“ on redistricting, and allowed Rockland County to be split for the first time in our history.

Despite Valentine’s claims, Carlucci never voted against the recent minimum wage bill and made no public sign that he would not. The bill has not come to vote in the State Senate this legislative session. And Carlucci has openly supported fellow Independent Democratic Conference member Jeffrey Klein’s minimum wage bill, which is almost identical to the bill passed in the State Assembly. Klein and the other Independent Democratic Conference Senators were behind the Senate version of the legislation backed Assembly Speaker Sheldon Silver and Assemblyman Keith Wright. Obviously, in Valentine’s eyes, Silver and Wright must be Republicans as well.

Carlucci received the unanimous endorsement of the Rockland County Democratic Committee on Thursday and had previously received the endorsements of the Town of Ossining Democratic Committee and the Independence Party. The new 38th State Senate district no longer includes the Orange County towns of Tuxedo and Warwick and Rockland towns of Stony Point and Haverstraw. Instead, it includes the remaining three Rockland County towns (Ramapo, Clarkstown, and Orangetown) and Ossining in Westchester.

Valentine attended Rockland’s Democratic Convention this week, but did not put up a challenge to Carlucci and did not seek the Democratic Committee’s endorsement.

Carlucci’s part in blocking the sales-tax raise in Rockland County divides Democrats, as do his recent votes on education and redistricing. Many progressives believe that more sales taxes for the county would put an unfair burden on those on fixed incomes who must use most their income to buy goods and services. Also, sales taxes have been a fool’s panacea for Rockland County in the past, and has allowed for Vanderhoef to project fantastic revenues to show balanced budgets. Vanderhoef’s revenue estimations perennially fell short and now Rockland County’s bond rating continues to sink and there is the real possibility it might go into receivership.

For the most part, Carlucci has been a progressive influence in the NYS Senate. He was the leader in State Senate efforts to suspend hydraulic fracturing in New York, was a major proponent of marriage equality, and helped implement a progressive tax structure that lowered taxes on lower-income wage earners. These popular progressive positions were not addressed by Valentine in his Facebook message.