150 years ago this week. there may have been a war waging between Union Soldiers and Confederates in the South and in the West — but in Nyack, the Summer Season was about to begin. An ad for the Tappan Zee House appeared on the front page of The Rockland County Journal, announcing the “that the Season of 1862 will commence on the Third of July, and continue TEN WEEKS…only [for] persons of known respectability.”

The hotel was located on the East side of Piermont Avenue between Cornelison and Mansfield Avenues if these streets in fact extended East to the Hudson River.

During the winter months the Tappan Zee House served as The Rockland Female Institute, a school for young women.  During the Summer, many escaped the city and vacationed here. This particular week there was a concert held to support the families of troops who were off fighting in the Civil War.  The editor of the paper praised President Lincoln for his leadership in an article entitled: “The President and his conservatism.”

The advertising copywriter earned his pay writing the flowery description of Tappan Zee House — complete with references for the types of “persons of known respectability” you might find at the hotel.

The Proprietors of this favorite Summer Resort have the pleasure of announcing to their former patrons and to the public, that the Season of 1862 will commence on the Third of July, and continue TEN WEEKS. Guests will be received by the day, week, or season, but, as heretofore, only persons of known respectability will be entertained.

The location of the Tappaan Zee House is one of the most delightful on the banks of the Hudson, and in point of accessibility, healthfulness, and beauty of scenery is unequaled by any place of Summer Resort contiguous to the great cities ; 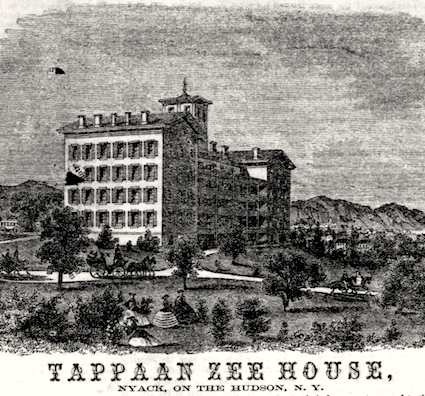 being reached by Steamers and Railroad almost hourly during the day, having a pure and bracing atmosphere, free from all malaria, and that pest of the Summer months, in most country places, the mosquito ; while the entire region abounds in picturesque and charming scenery, affording delightful drives, and sources of perpetual enjoyment to the lovers of nature. The grounds comprise ten acres, and pleasant walks and shady spots on the banks of the river, make this a most desirable place for families with children. There is a fine beach for bathing, the water is salt, and there are pleasant dressing rooms for the convenience of guests; there is also a pier for yachts and boats. The extensive gardens afford fresh vegetables in abundance for the table, and several milch cows are kept.

The Carriage Houses are commodious, and guests can have their own horses and carriages kept, or be furnished by the Proprietors with carriages and saddle horses, at their option. An Omnibus and Baggage Wagon from the Tappaan Zee House, will run regularly to the morning and evening Steamers, and to Ferry Boat, when ordered.

The House is a large and substantial brick structure, having all the conveniences of modern first-class houses, gas and water throughout, and is genteely furnished. 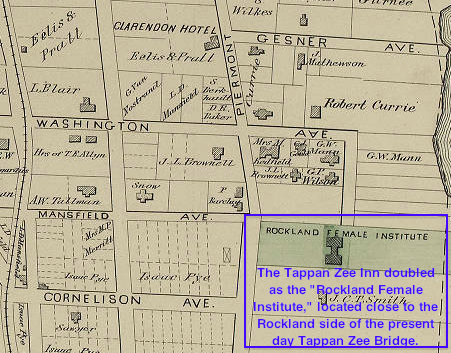 The apartments are all commodious and airy, embracing Parlors, Dining Halls, Billiard and Reading Rooms, suites of rooms, and apartments of various sizes adapted to the convenience of families or single persons.

The House will be generously kept, as hitherto, and nothing essential to the comfort and enjoyment of guests shall be wanting.

The Proprietors consider themselves fortunate in having secured the services of Mr. T. G. Campbell, well known as a first-class Caterer, who has had supervision of that department in some of the best Hotels in New York and Boston, and also at the Ocean House, Newport R.I.

A plan of the House may be consulted at the office of Eugene Plunkett, Esq., President of the Excelsior Insurance Company, 130 Broadway. The Rooms of the House will also be open for inspection from this date. As a large number of rooms are already taken, those who desire to engage apartments will do well to call or address immediately, May 26th, 1862. L. D. & C. F. MANSFIELD, Proprietors.

Brian Jennings is the local history librarian and librarian supervisor at the Nyack Library. This article is part of a series extracted from scanned copies of the 1850-1884 Rockland County Journal which include The Civil War and the period in which realist painter Edward Hopper lived in Nyack. They provide us with a snapshot into what life was like in Nyack and Rockland in the late 19th century.