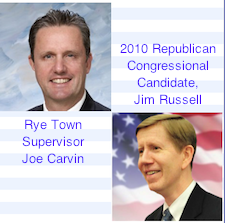 by Jonathan Baker, author of the Baker on Vancouver blog

New York will hold its first ever federal Congressional primaries on June 26th (they’ve never been held on this date before) and the 17th District’s GOP contest will decide the party’s nominee to oppose the Democratic incumbent, Rep. Nita Lowey. The 17th District, brand new as a result of the every ten year Federal census which results in redistricting to equalize Congressional district population (New York lost two Congressional Districts as residents fled the state’s high taxes, high property taxes, and lack of jobs) now covers most of Westchester County (just outside New York City) and all of Rockland County, just across the Hudson River from Westchester. The District runs the gamut from wealthy to poor residents.

One Republican candidate, Joe Carvin, the twice elected Rye Town Supervisor, has the full support of the Westchester and Rockland County Republican parties, having been endorsed at their convention on March 27.

The other candidate, Jim Russell, will be on the ballot to oppose Mr. Carvin in the primary.

Mr. Russell, who has run for Congress at every opportunity, may have been ejected from a parallel universe. Back in 2001 he published an essay which, finally in 2010, received national media attention when he was on the Republican line for Congress, after the party’s choice, a Lt. Colonel in the Army Reserves, was called up to active duty just before the election by the Pentagon and sent to Afghanistan. Mr. Russell wound up on the party line by default. But his being there caused the national media to start looking into his background, and in September of that year both the web site Politico, the Gannett Journal News (which covers Westchester and Rockland), various magazine reporters, and the New York Times read his essay and discovered he was that most abhorrent of public figures, a racist and anti-Semite.

Here’s how Peter Applebome of the New York Times described Russell’s essay in a September 26 article:

‘€œMr. Russell seemed to embrace, among other things, racial separatism, eugenics and an assortment of historical and literary figures with anti-Semitic or Nazi ties. It also turns out that he has attended gatherings of groups with white nationalist views.’€

Mr. Applebome went on to report that ‘€œRussell writes that ‘€˜parents need to be reminded that they have a natural obligation, as essential as providing food and shelter, to instill in their children an acceptance of appropriate ethnic boundaries for socialization and marriage.”€

Candidate Russell is also quoted (not by the Times) as claiming: It has been demonstrated that finches raised by foster parents of a different species of finch will later exhibit a lifelong sexual attraction toward the alien species. The raising of finches is one more thing Washington should regulate.

In response to his publications Russell pleads what lawyers call various rules of statutory interpretation.

This will be quite a campaign. Russell’s opponent, Carvin, represents everything Russell loathes. Carvin is married to an African-American and has mixed-race children. He speaks five languages fluently (French, Spanish, Portuguese, Wolof, English), and has lived throughout the world. He co-founded Building Community Bridges (a group created to promote interracial and intercultural understanding) and One World United and Virtuous (to encourage international understanding).

So there you have it. The Rockland and Westchester County Republican Parties and every Republican candidate for county and state wide office in Westchester and Rockland Counties has disowned Russell (as the GOP did in 2010) but not every registered Republican who can vote in the primary may know all of this. What happens if instead of telling Russell to ‘€œget thee behind me, Beelzebub’€ they nominate him? The simple answer is the Republican parties in Rockland and Westchester Counties will once again disown him, and Mrs. Lowey will win the election, as she did in 2010, by default.

In a letter to the editor published June 11 in the Gannett Journal News, one writer said that the eyes of the county, the state and, yes, the nation will be on this primary watching whether or not Republican voters drown out a bigot from another dimension with a finch obsession.

As Others See Us is an occasional feature that covers what publications outside of Rockland County say about the people and events in Rockland County.

In this article:Civic Discussion, Politics/Elections