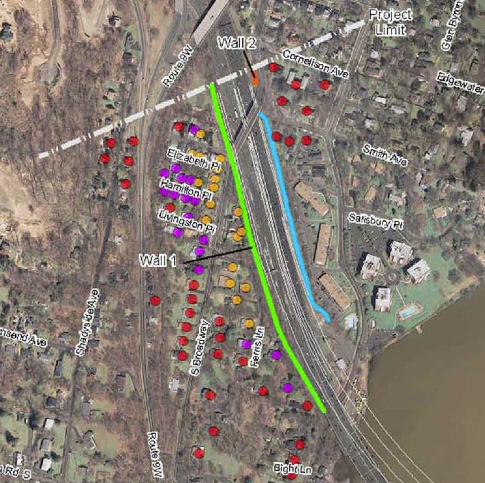 The green line, running from the South Broadway Bridge to the shoreline of the Hudson River, is where the NYS DOT proposes to build a sound barrier to reduce noise from Thruway traffic as part of the Tappan Zee River Crossing Project.

Nyack, May 16 — Every two seconds, the persistent clanging of the Tappan Zee Bridge test pile driving could be heard as far North as Hook Mountain on Wednesday afternoon. But it wasn’t quite as loud as the din created by about 150 frustrated and testy South Nyack and Grandview residents at a public meeting on Tuesday with Thruway planners to discuss building sound barriers to mitigate the noise of future traffic on the TZB.

The South Nyack Village Board said the Wednesday tests had been extended until about 6p because workers found that the soil wasn’t as hard as they had expected and the preferred technique of vibrating the piles into place wasn’t effective. The Village of South Nyack has been sending out daily updates on the pre-construction tests with information supplied by the NYS Department of Transportation. The final pile driving test is scheduled to for Fri May 18.

Sixty residents whose homes border the Tappan Zee Bridge landing in South Nyack, Grandview and Upper Grandview received an invitation for the May 15 “Building Barriers to Traffic Noise” meeting at the Best Western in Nyack on Rt 59. According to a preliminary analysis by the DOT, these homes are expected to receive at least a 5db reduction in noise if a new sound barrier is built on the South side of the NYS Thruway in these communities — which classifies them as ‘benefited receptors,’ according to the DOT.

“We want your concurrence as benefited receptors about building a noise barrier,” said Elizabeth Novak, an Environmental Analysis Specialist with the NYS DOT.  Novack said the Department of Transportation sent ballots to the 60 homes to vote yes or no about building the barrier. If 51% vote yes — and further analysis confirms at least a 7db in noise reduction — a new sound abatement will be added to the TZB construction plan. Eligible residents have until May 24 to mail their build/no-build ballots to the NYS Department of Transportation.

The proposed noise barrier would range from 10 to 24 feet high depending on its location. The area eligible for noise barriers in Rockland runs from the South Broadway Bridge in South Nyack to the shoreline of the Hudson River on the South side of the I-287.

It wasn’t clear why anyone would vote against building a wall — but obstructed views and limited effectiveness were some of the concerns raised by residents. “How can we vote without knowing what the barrier will look like?” asked Eric Strober of Upper Grandview. “This is premature. Unless we know what bridge is being built and at what height, how can we make a decision?”

Novak concurred with criticism from residents who said noise barriers don’t block the sound of traffic — they only reduce it.

Attendees and elected officials were frustrated by the DOT’s handling of the meeting. No official announcement was made other than a letter sent to the 60 benefited receptors property owners. Neither public officials, the media nor other non-voting adjacent homeowners were invited to attend — although no one was prohibited from coming to the meeting, either.

The Final Environmental Impact Statement for the project is expected to be complete by the end of July.