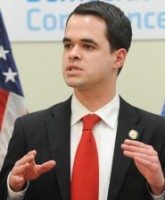 The last time David Carlucci and Scott Vanderhoef went head to head was in 2010 when both men ran for the seat formerly held by the late New York State Senator Tom Morahan. Carlucci, the former Clarkstown Clerk, won that race against Vanderhoef, who has served as Rockland County Executive since 1994. Those rivals were in the news again this week when NYS Senator David Carlucci declined to introduce legislation requested by Vanderhoef to increase the county’s sales tax rate by .375 percent.

‘€œI remain committed to working with Rockland County to help them find a way out of its financial mess,” said Carlucci. “However at this time I can not in good faith submit a home rule request to increase taxes on the already over taxed residents of Rockland County.’€

Vanderhoef’s office didn’t respond to a request for a response on Tuesday.

Carlucci said the proposed tax increase wouldn’t solve Rockland County’s fiscal crisis. ‘€œThere remains nearly $18 million in this year’s budget in unrealized labor concessions,” said Carlucci. “These concessions, if not agreed upon, would unbalance Rockland’s budget and add an additional $17.5 million on top of the county’s current deficit.” Carlucci said he was also concerned about the Summit Park Nursing Home which loses tens of millions of dollars.

Rockland County Legislature Chairwoman Harriet Cornell said if the state isn’t going to give Rockland the increase it requested, the least it could do is cover some of the unfunded mandates imposed on the county. “Our well-thought out plan to eliminate the county’s deficit and enable continuation of critical services for public health and safety is one which would be least painful to residents.  Unfortunately, it is the State of New York which has burdened the taxpayers of Rockland with unfunded mandates and requires the County of Rockland to perform these services for the state.” Cornell says that almost all of Rockland’s property tax revenue goes to Medicaid. “If the state is turning its back on our plan with built-in safeguards where the money raised through a fraction of a sales tax would go into a lock-box in 2013 to eliminate the deficit for future generations, there’s an easy solution:  just pay us for the services we provide to the State of New York!”

Carlucci may have had more than taxes on his mind when he decided to withdraw his support for Rockland’s revenue increase. He’s running for re-election this Fall in a district which was reconfigured based on 2010 census results. Greenlighting a tax increase, no matter how well justified, would give both any opponent in the primary or Fall general election ample campaign fodder.