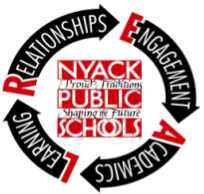 Nyack Public Schools are committed to providing the very best educational opportunities possible for our students to ensure they are equipped with the academic standards vital in the 21st Century. At the same time we take very seriously the obligation to be fiscally responsible to the community’s taxpayers.

All Programs Continue to be Supported: The budget continues to support all educational, arts, co-curricular and athletic programs. Although there are central office personnel cuts due to a restructuring, instructional staff, and class sizes have been maintained. Several factors contributed to our ability to avoid reduced services, in light of cost drivers out of the district’s control, not the least being ongoing strong fiscal management that has provided long range efficiencies and planning.

The decision to cap the amount of increase on the school tax levy has been made in Albany, but the tough decisions will continue to be made at local school boards. Nyack Schools’ Trustees are committed to continue to find ways to minimize the impact on students as economic challenges continue.

If you have any questions. please contact the Public Information Office at 353-7013 or gfleur@nyackschools.com. It is important that you go to the polls on May 15 as an informed voter.

What is the difference between the tax levy and the tax rate?
The tax levy is the amount of total revenue to be raised by a district’s taxpayers. The tax rate is the amount a home owner will pay per $1000 in assessed value of their home.

What is the new NYS tax levy cap?
In June 2011 State leaders responded to NYS high property taxes and the pressure for tax relief by enacting a law that places a limit on a school district’s tax levy. Although the new law has been referred to as a ‘€œ2% tax cap,’€ the actual tax levy limit for each district will be determined by a complex formula, making each levy limit different. To override a district’s levy cap approval is needed by at least 60% of the total vote.

What is the district’s tax levy limit?
The proposed tax levy of 2.17% is below the 2.6% limit allowable by the state formula. The $273,686 difference, by law, is permitted to be carried over to a future year, when it may be needed to cover expenses outside the District’s control.

How did the new tax levy cap affect the budget’s goals and development?
Previously, the annual budget was developed by balancing student need, community input, and estimating a level of taxpayer support. With the new levy cap the revenue that can be raised through taxes was the starting point for budget development.

In addition, the goals for the budget were achieved: to sustain quality programs, identify budget reductions that do not directly impact instructional programs, provide for staffing levels that maintain District class-size guidelines and reduce District reliance on surplus funds from last year.
How were costs reduced to meet the mandated tax levy cap?

Costs were reduced with a central office restructuring, which includes the loss of one Assistant Superintendent position, retirements, and reduction of support staff. The work associated with these positions will now be handled by a redistribution of responsibilities among personnel. In addition, this year the health benefit premium increase was less than expected and the MTA tax for schools was eliminated.

Are educational programs affected in the budget?
All educational, arts, athletic and co-curricular programs are sustained in the budget. Moreover, the District continues to move forward with its technology efforts and curriculum revision in many areas. Some new additions to course offerings (with no added cost) are: SAT preparation and College Readiness, the Civil Rights Movement in America, American Sign Language III and an exciting partnership with Nyack College to offer Mandarin Chinese and Arabic for our students.

How do state and federal mandates impact the budget?
Unfunded or partially funded mandates represent a major portion of a district’s budget. They are constantly increasing in areas of instruction, special education, auditing, testing, scoring, staff development, professional evaluation requirements and health/safety measures. Over 100 mandates affect every aspect of school districts in complex ways and are inconsistent with aid for them. Lobbying efforts continue to reduce mandates, especially in light of the tax cap.

How has the district responded to the fiscal crisis in recent years?
Budget to Budget Increases have been lowered to an average of 1.13% over three years. During this period there have been reductions in supplies, co-curricular clubs, athletics, administration and personnel. Other ongoing cost savings are:

Over the past ten years, costs/state mandates increase while NYS aid did not

What will happen if the school budget is not approved?
According to NYS law, Nyack Board of Education: