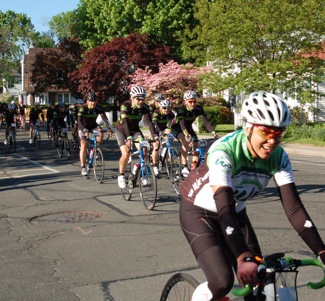 Cyclists on N Broadway in Nyack during Gran Fondo 2011

In the 1966 movie, The Russians Are Coming, The Russians Are Coming, it was a submarine of stranded Russians making an unexpected visit to a sleepy New England coastal village. This Sunday in Nyack, it’s the Italians, Canadians, Australians, South Africans, Japanese and lots of Americans too — on bikes. Cyclists from 48 states and 70 countries will compete in the 2nd annual Gran Fondo New York ride on May 20. It’s a 110 mile event from New York City to Bear Mountain and back where riders compete on four timed vertical climbs as much as 1253 feet.

Organizers say the 5,000+ riders will come through Nyack between 7:45a and 9a — with the bulk of the pack traveling North along Piermont Road, Gedney, 4th Avenue and North Broadway between 8a and 8:30a. “We’re excited to be back in Rockland and proud to be able to show the beautiful county to our riders, many of them coming from across the country and around the world,” says Uli Fluhme,  the COO of Gran Fondo NY. After working for five years as an attorney at a financial institution, Fluhme decided to put his two passions, cycling and New York, together in an event that debuted last Spring. “The reception we had from the locals last year was phenomenal. Gran Fondo New York is such a unique event and well worth getting out and cheering on the riders,” he says.

The racers start in NYC, lining up as early as 5:45a to cross the George Washington Bridge on the lower level on three lanes for the exclusive use of riders. The route then travels up 9W through New Jersey through Piermont and Nyack. The turnaround point — a four mile, 1255 feet climb to Perkins Memorial Tower at Bear Mountain State Park — is also the Cima Coppi, or the highest point of the ride. The riders then head South via a Western Rockland County route to the finish line Port Imperial Ferry Terminal in Weehawken, New Jersey. 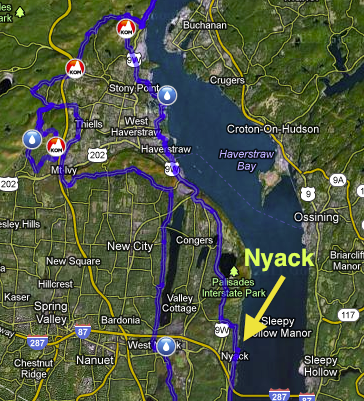 Nyack bike enthusiast and graphic art designer Heidi Broecking described last year’s ride as terrifying, exhilarating and totally empowering. “One of the most amazing things was being on the lower level of the GWB at 7am, sun peeking up over the city skyline, lighting up the Palisades.  It gave me a whole new appreciation for the beauty of where we live.” Broecking, who has been training for the 2012 ride with the official Grupo Suportivo Gran Fondo team, says that the event has shown her how large the New York and Rockland cycling community really is. “Looking around, seeing 2000 other people with the same jersey, hearing different languages, accents, I realized that to a vast majority, it would be a completely new experience. What I consider my “backyard” for cycling got a little shinier,” she says.

Last year’s event came down Main Street, however, the 2012 Gran Fondo ride is being re-routed around downtown to avoid the Nyack Street Fair which opens at 10a. 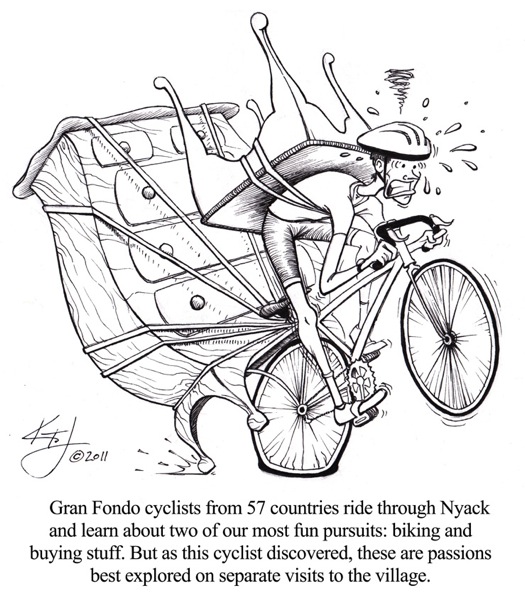