A tour of Oak Hill Cemetery in Nyack reminds us that the Civil War isn’t just remembered in history books. A memorial to the soldiers from Nyack who fought in the War Between The States stands at the top of Oak Hill, overlooking the village and the Hudson.

Over 150 years ago, H.A. Beach, a member of the 48th Regiment of New York State Volunteers on Dawfuskie Island in South Carolina, wrote from the front about the bombardment and capture of Fort Pulaski by the Union soldiers. In his letter, Beach reflects upon the meaning of the war to himself and the nation.

This is the first in a series of articles which will highlight stories originally published in The Rockland County Journal while the nation was in the throes of a bloody Civil War.  These posts will provide us with a glimpse into how the war affected the lives of people in the Nyacks and how those people felt about the war.  We now have access to these materials online at http://news.hrvh.org. 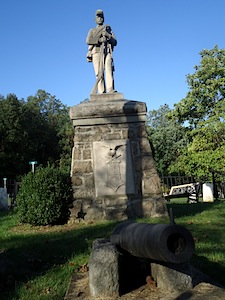 I look upon this war, so far as our government is concerned, as a sad necessity, forced upon us, and which we on our part entered into as the only means left us of honorably perpetuating the most beneficent and just government ever formed by man, and of upholding our institutions of civil and religious liberty; and the more victories that can be gained without bloodshed the better it will be.

Again, I look upon this war, sad as it is, as a means that God is using to purify us as a nation, to bring us nearer to himself, and develop our strength, and to establish more permanently whatever is good in our system of government while the bad like dross is consumed. Already can we see this is resulting from the events which daily crowd themselves into our history, and North and South are both learning lessons, which, however bitter will be useful, and will never be forgotten.

The motto at the head of your paper’€” ” Light! more light!” is becoming a national prayer, and God is answering it, revealing – not only ourselves to ourselves, but showing forth the true nature of a Republican Government to the world.

Beach regularly corresponded with the newspaper, filling the public in on his regiment. In one interesting letter, Beach describes the education of freed slaves in Port Royal.

At 23 years old Henry A. Beach was listed in the 1860 Census as a Methodist Clergyman living in Nyack, so Mr. Beach’s identification of the Civil War as a divine event is not unusual.

It is likely that many local citizens related to his interpretation of events.   Harry Stout asserts in Upon the Altar of the Nation: A Moral History of the Civil War that the war demanded a “moral campaign to establish the justness of a resort to arms” and the voices of clergy were especially important as both sides sought to “enlist God in their cause as both justifier and absolute guarantor of their deliverance.” Henry Beach was the local voice of clergy responding directly from the battlefield and reporting on events.

Abraham Lincoln summed up the religious dilemma of our Civil War best in his second inaugural address:  “Both read the same Bible and pray to the same God, and each invokes His aid against the other.”   A little over a month after Lincoln spoke those words, he was dead and the war was over.