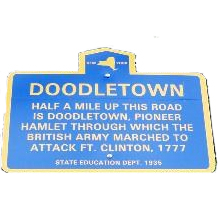 Take a hike back through time on Sat April 21 to Doodletown, a ghost hamlet now part of Bear Mountain State Park. Former Doodletown resident Ellen McGuire will join Rockland County Docent Louise Parnell for the 4-5 mile walk to the remains of this once thriving community of 70 homes lost to eminent domain in the mid-1960s. The hike features a first hand account of life in the hamlet and a review of the history of Doodletown.

“It’s sad because there was a whole hamlet, a whole village-town, of people, who aren’t there anymore,” McGuire told WFUV news.

Doodletown dates back to 1762 when it was partially settled by descendants of French Huguenots. The British army marched through the hamlet to attack Fort Clinton in 1777. Inventor Thomas Edison had his hand in its history when he bought a defunct iron mine in Doodletown to test an improved method of refining ore in the 1890s.

By the 1920s the town had a school, a church, several small businesses, two cemeteries and approximately 70 homes. Many families had lived there for generations, but the mines had been emptied and the town was beginning its decline. During that time, Bear Mountain State Park began to expand by purchasing property from the landowners in Doodletown. By the 1950s, most of the residents had moved away, many to nearby Stony Point or into southern Orange County. Those who refused to sell lost their land through eminent domain, and most of the remaining structures were demolished in the late 1960s. The debris was buried, the roads were closed, and the surrounding woods were allowed to grow over the properties. In the early 1970s, a dam was built on the Timp Brook, and part of the town was submerged. The last remaining building, the stone school house, was kept as a shelter for hikers until vandalism caused the park commission to tear it down in 1980.

For more information on the Sat April 21 10a-1p hike, visit RocklandSteps.org. Pre-registration for this walk is required at 845-708-7307 or rcamericorps@co.rockland.ny.us.