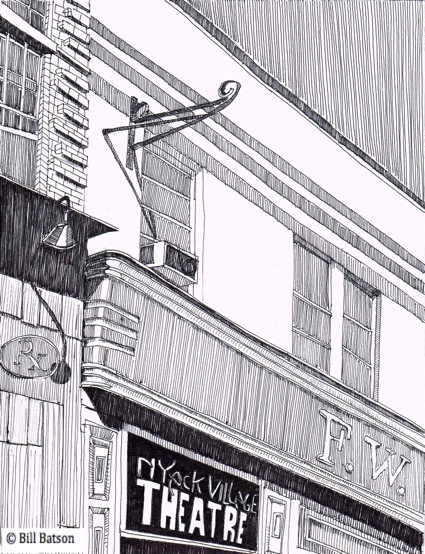 The Nyack Village Theatre sign is unassuming and you might just walk on by, but that would be a mistake.  One exposure to the live content that is produced from this 49 seat black box theater space will stop you in your tracks.   Nestled one story above the site that was once F.W. Woolworth is an expanding multimedia arts organization founded by 1980’s rocker turned impresario Richard Quinn.

The arts center appeared on my radar screen last Halloween, when I saw a poster advertising a midnight showing of The Rocky Horror Picture Show.  As  a teenager, I saw the cult classic more times than I care to admit across the street when what is now Riverspace was a garden-variety movie theater.

When Rocky Horror exploded onto the counter-cultural consciousness of America in 1975, Quinn was a recent high school grad getting his real education in legendary New York City clubs like Max’s Kansas City and CBGB.’s.  This was the moment when acts like Talking Heads, Lou Reed, Patti Smith, The Ramones and Blondie were emerging on the music scene. His band Quinn & The Eskimos would later play those same venues.

The Nyack Village Theatre that Quinn opened in 2006 is influenced by the energy and eclecticism of the New York art scene of the early 1980’s.  It was in the economically ravaged East Village that Punk, New Wave, Hip Hop and Graffiti cultures converged in downtown nightclubs and art galleries.  ‘€œI like to think of myself in the tradition of Andy Warhol.  I’m building an art factory,’€ said Quinn of one of the sources of his inspiration.

Quinn with Carolyn Magnani on 7th Avenue in 1978

If the Nyack Village Theatre is a factory, there are several divisions that manufacture a variety of art products.  The theater is actually a spin off of two other endeavors.  In 2003, Quinn launched Rockland World Radio, an online broadcast station that’s not just radio,  streaming live video of all programming.  Modern Metro Zine or MMZ  offers the insights and expertise of the hosts of the Internet program in print form.

The media platform that Quinn has built is like a dim sum menu of all that was excellent about New York City in the late twentieth century.  It’s a mash up of several pioneering cultural institutions combining the political edge of WBAI, the bold experimentalism of Joseph Papp’s Public Theater, the bombast of CBGB’s and the intimate sloped screening room vibe of the Thalia.

A recent Wednesday evening will give you a flavor of the content of Rockland World Radio: local attorney Glen Keene sits at a table at the center of the stage of the Nyack Village Theatre interviewing local artist and poet Rose Marie Raccioppi.  The program is streamed live over the Internet.  At the end of his hour segment, John Marshall arrives with his sons, Zachary and Quincy to chaperone their teen focused hip-hop program, Youthology Hour.  The teens are both the production staff and hosts for their program.   Next up is Creating Health, hosted by Dr. Ken Davis. The evening ends with Talk About it Cora!, a show on style, beauty, glamour and fashion.

The production facilities are an ideal location to incubate local talent.  Quinn has been working recently with local musicians Charles, Martin and Jermaine Paul who perform as the Mighty Paul Brothers Band.   You may have seen Jermaine on the hit reality talent show, The Voice.  Jermaine recently survived the battle rounds and is now singing for votes in front of a live national TV audience.  Quinn produced the look for their music video “Can’t Walk Away.”

Quinn is proudest of his most recent creative coup: his new resident theater group the Antics Road Show.

The original sketch comedy group has sold out two runs and has a new series of shows scheduled for May, July and August.  Antic’s also offer improv, acting and writing workshops.

The Nyack Village Theatre is a place where Quinn told me he hoped to introduce the public to art, performance and information that they can’t find anywhere else.  When I heard him utter that statement, my jaded and skeptical self spoke up.  I challenged him to name something that he had produced lately that fits that bill.

In a New York minute Quinn described the screening of never before seen footage from an unreleased documentary about Jim Hendrix by Dave Kramer.  The film was accompanied by a showing of original artwork created by Jim Hendrix owned by the family of drummer Christian Van denHueval. Quinn’s hype minus the hyperbole is refreshing.

On a recent Sunday, Quinn showed a free matinee exhibition of the “Fresh, the movie.” He told me that the filmmakers decry the collapse of the symbiotic cycle between animals and plants that has resulted from the advent of corporate agriculture and jeopardizes our health and our food supply.

Quinn feels that there is a similar life cycle between the artist and the audience. “The artist needs the audience to exist and the audience needs art to survive.  Art is nourishment for the soul,” said Quinn.  So if you are hungry for some art, Quinn serves it up on line, in print and on stage.  The concepts and content might be heavy, but its calorie and gluten free.  Bon Appetit.

This Friday is Open Mic night and on Saturday: Belly dancing.  Visit Rockland World Radio for a calendar of events. Richard is looking to build alliances with people with audio and video production skills, theatrical staging experience and digital expertise.  Call 845.826.2639 for more information.

Photos are courtesy of Richard Quinn and Carolyn Magnani.