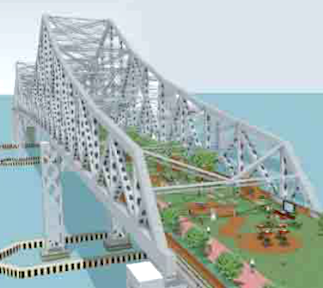 The Tappan Zee Bridge Greenway, an ambitious initiative by Greenburgh Town Supervisior Paul Feiner and White Plains Councilwoman Milagros Lecuona to turn the existing TZB into a path for pedestrians and bikers, died a quiet death last week when the NYS Department of Transportation released its instructions to the four firms who will submit proposals to build a new Hudson River crossing. Despite Governor Cuomo’s nuanced endorsement on Feb 27 calling the initiative “an exciting option,” the word “demolition” appears 20 times in the RFP with no text devoted to any plans to salvage the 56 year old decaying bridge.

Page 6 includes a sentence which is tantamount to a death sentence for the Tappan Zee Park concept. “The project includes the design and construction of a replacement bridge crossing of the Hudson River adjacent to the existing Governor Malcolm Wilson Tappan Zee Bridge, associated approaches, a shared-use path, and demolition of the existing bridge.”

The governor’s comments, made at an open-to-the-media cabinet meeting last month, spawned at least 150 news stories about the greenway concept just days before public hearings in Rockland and Westchester about the Draft Enviornmental Statement for the Tappan Zee Hudson River Crossing Project.

Although bike advocates and Greenway fans liked to compare the Tappan Zee Park plan to the Walkway Over The Hudson and the Hi-Line in Manhattan, they failed to make an economic case as to how the current bridge could be preserved and maintained. Although mass transit and road improvements have been jettisoned from the original TZB project design, tearing down the current bridge to replace it with a second span was always in the plan. Estimates for the annual maintenance cost of the current bridge run from $50 million to $100 million — and it’s hard to see how that number would be substantially reduced if the bridge were to become a park. It’s also doubtful that a new bridge could support current capacity without a second span.

Cyclists and pedestrians will still be able to cross the new bridge on foot or by bike as the RFP calls for the construction of a 12 foot bike path on the North side of the new North span.

The press release for the RFP process highlights the following sections:

Proposals are due by July 27 with groundbreaking predicted to begin sometime in the Fall.