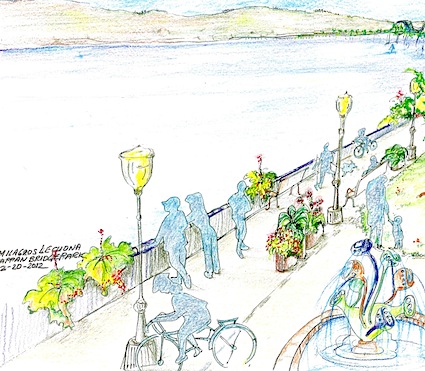 The co-chairperson of the Tappan Bridge Park save-the-TZB effort says recent reports of the project’s death are greatly exaggerated.

Two weeks before the New York State Department of Transportation released the DEIS on the Tappan Zee Hudson River Crossing, Governor Cuomo, in an open-to-the-media cabinet meeting, stated that the conversion of the Tappan Zee Bridge into a linear park is an exciting option that needs to be evaluated. According to state DOT officials, an evaluation of this option is currently underway.

The conversion option came under consideration after several of us proposed this idea to Governor Cuomo last year. By that time, the scope of the DEIS was already established and had been approved.

The Tappan Zee Bridge is owned by the NY State Throughway Authority.  In order to change the scope of the study of the DEIS, several state authorities need to approve the scoping document and there is no need to delay the DEIS or the bidding initiation process only based on the bridge conversion alternative. Keep in mind, that such a conversion, or total demolition, cannot happened until the bridge replacement is up and running.

The RFP is not a ‘€œwritten in stone’€ document. The RFP is just the beginning of the bid process.  There are many mechanisms that could be used during the bidding period that could allow for changes at different stages of the process, such as addendums and bulletins.  How the demolition work would appear in the contract is also relevant, is it an deduct or an add alternate.

While the RFP currently assumes that the existing bridge will be demolished, it could easily be amended to accommodate conversion rather than demolition. In fact, in a recent conversation with New York Throughway Authority project manager, Michael Sullivan, he confirmed that the state is looking into the conversion option and that the fact that the RFP at this stage is not mentioning the bridge conversion doesn’t preclude that the option be incorporated in the future.

I also would like to clarify that the Tappan Bridge Park Alliance is perfectly aware of the differences between the High Line, the Walkway across the Hudson and our proposal.  Mr. Schaeffer, a key person behind the Walkway across the Hudson, is actually one of our most active committee members and is frequently sharing with us their experiences and strategies that enabled them to succeed and will help us to keep our vision moving forward.   The Walkway across the Hudson took 17 years to become a reality, partly because many people were not able to envision it’s success.  Since it opened, two years ago, however, it has proven to be a great success.

I do appreciate NyackNewsAndViews bringing the demolition issue in the RFP to the attention of the Tappan Bridge Park Alliance. It is understandable that  people not familiar with the bidding process might believe that because the RFP does not mention bridge conversion while frequently mentioning demolition, conversion would therefore not be an option, and that this might lead somebody to believe that ‘€œthe Tappan Bridge Greenway is dead before arrival.’€ However, that is dead wrong! Conversion remains a very viable option.