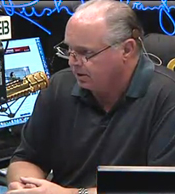 Love him or hate him, fans and critics can agree on one thing: conservative radio talker Rush Limbaugh makes an impression. The difference is between  those who think he makes a good impression or just a lasting one.

Knowing that he’s controversial — and frequently divisive — you might be wonder why major advertisers allow their brands to be associated with the King of the Ditto Heads.

Amongst the fire storm over the comments Rush Limbaugh spoke about the Georgetown University law student, many advertisers have suspended running their commercials during his program. The list of advertisers includes AOL, ProFlowers, Carbonite, Citrix Systems, Inc., Quicken Loans, Legal Zoom, Sleep Number, and Sleep Train. Despite the flight of major advertisers, Limbaugh says he isn’t worried. “Everything is fine on the business side.  Everything’s cool,” says Limbaugh in a post on RushLimbaugh.com. “There is not a thing to worry about. What you’re seeing on television about this program and sponsors and advertisers is just incorrect.”

Advertisers that advertise on radio do so for many reasons. Some of those reasons include building upon customer relationships (brand loyalty) and new product launches (extending brands). Advertisers believe that engagement is a key component to commercials that are successful. Whether the consumer ‘€œlikes’€ or ‘€œdislikes’€ the commercial is irrelevant as long as they get the message.

Talk radio personalities act their part for numerous hours every given week. Advertisers seek large audiences that are most engaged especially in the ‘€˜Mid-day’ time period (generally considered weekdays from 10a-3p) that are riveted to the speaker whether or not that person is on the right, left, conservative or liberal as long as their audience is comparatively large and loyally engaged so they stay tuned during the commercial breaks.

Advertisers believe that prime time on radio equals drive times which equate to weekdays during the mornings from 6am to 10am and afternoons from 3p-7p. The ‘€˜Mid-day’ time period is considered a time when listeners have the radio on in the background and are doing other things and that is why stations that play music have difficulty charging their advertisers the same amount as they do during their drive time programming. Because it is believed that listeners to music are not as engaged as they are during drive times, stations that air talk programming have a higher engagement with their audiences so advertisers tend to covet these audiences.

Size does matter and talk radio whether it is Rush Limbaugh, Sean Hannity, Alan Colmes, Imus or Mike Francesa. These charismatic hosts deliver large targeted demographic audiences that are engaged with their advertisers on these type of programs more so than with other kinds of content during these dayparts.

Shock jocks and controversial talkers thrive on pushing the envelope for their dedicated followers. Despite the fire storm that follows their controversial remarks, they often survive.  Some have been forced to take a leave of absence after inappropriate comments. If they have any talent, it’s usually resilience: many have resumed their careers after controversy. Both Don Imus and Glen Beck were banished but returned to broadcast — maybe with less glory and on another platform — again. And their advertisers return because despite their controversial comments, they still can draw a big audience.

Will Rush survive? There’s only one way to know: stay tuned.