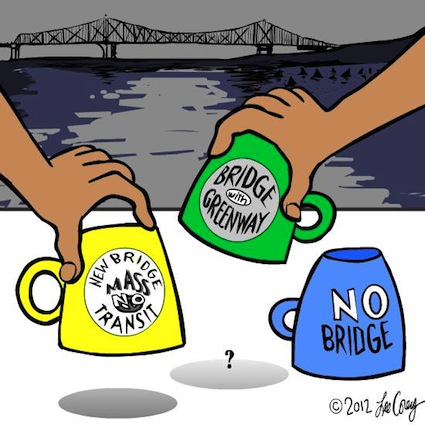 Nyack, Mar 4 — Over the last two weeks news about the Tappan Zee Bridge has been non-stop (except if you happened to be stalled in a backup on our highway across the Hudson). On Feb 28 Governor Cuomo suggested that turning the current bridge into a greenway for walkers and bikers was an “interesting option” (while neglecting to mention that “interesting option” conflicts with already approved plans to put a new span where the current bridge now sits).

Last week, public hearings were held in Rockland and Westchester on the TZB Draft Environmental Statement. The proposed plan received

We also saw graphic pictures of TZB deterioration from underneath the bridge and a heard about a compromise suggested by Rockland County’s Chief Executive which might satisfy both Governor Cuomo and mass transit advocates.

In the ten years the DOT has been talking about this project, there have been a lot of high expectations and broken promises. Ironclad assertions have been reversed to match changing political realities leaving many feeling like they are an unwitting participant in a public works shell game.

There’s one important difference: in a real shell game, there’s money somewhere. The public has yet to hear where the money is coming from in this game.

Lee Corey is the owner of CoreyToons, a small digital animation and design studio whose production credits including Nickelodeon, Cartoon Network and Disney TV. Lee is a long time resident of Rockland County and a part-time animation instructor at Pratt Institute.