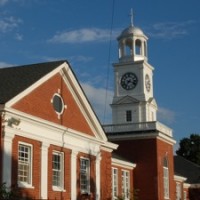 On the morning of March 24, 1972, a Nyack school bus encountered a detour on the way to the old High School where Rockland BOCES Adult Ed is now located. The bus from Valley Cottage had to backtrack all the way to Congers to clear the construction. Loaded with 49 Nyack High School students, the bus and its moonlighting NYC firefighter driver would never make it to school that day. Fate awaited in the form of the Gilchrest Road Erie and Penn Central Railroad intersection a crossing without gates or even warning lights. Students feared they’d be late for first period when they saw a train further down the tracks. Inexplicably, the bus continued forward into the crossing. The bus simply did not stop the 83-car train COULD not stop.

Did the driver not hear or see the train? Was he trying to out race it? No one can say for sure what went on in his head that fateful morning. Though sentenced to five years probation for criminally negligent homicide, Joseph Larkin maintained to his death 10 years ago that he did not see the train. It was obvious that he was tormented for the rest of his life by the events of March 12, 1972, but that would be no consolation for the victims and their families.

The freight train sliced through the middle of the bus, dragging part of it for almost a quarter of a mile. Three teenaged boys were killed instantly: Jimmy McGuiness 17, Richard Macaylo 18, and Bobby Mauterer 14. Thomas Grosse 14 died several days later, Stephen Ward 16 would lose his battle for life on April 14. The other 44 students and the driver were hospitalized. Some of the injuries were severe including loss of limbs and a number of teens would remain in the hospital for months. The Rockland Journal News would print daily updates on the recovery of the Nyack students throughout the Spring and into the Summer.

The Nyack School District will hold a ceremony at the old High School on Monday, March 26, at 7:55 AM, to commemorate the 40th anniversary of that terrible tragedy. Student leaders, the school’s Advanced Chorus and a student trumpeter playing taps are part of the program. Dr. Ira Oustatcher, the former Principal of Nyack High School, will speak as well as Nyack Superintendent of School Dr. James Montesano. Community members are welcome at this brief ceremony of remembrance.

Dr. Martha “Bobby” McGuffie was on her way to work at Nyack Hospital that tragic morning when she came across the accident. The USA’s first female plastic and reconstructive surgeon would eventually operate on many of the survivors.

From this tragedy came many new safety regulations for school buses, including stopping at every railroad crossing before proceeding through. The next time you are at a railroad crossing grumbling about the stopped school bus in front of you, take a moment to remember WHY. The scars for Nyack High School would take a long time to heal several cast members in Nyack High School’s Spring Musical appeared with crutches or in casts. Graduation was an intensely emotional affair remembering those lost and honoring those struggling to rebuild their lives. Anyone who went to Nyack High School during those years, has a haunted look behind their eyes whenever someone brings up the topic.