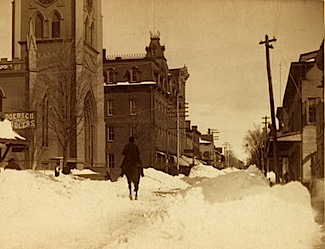 If the warm trend continues, the only snow event of the 2011-12 season will be the pre-Halloween trick that was no treat for thousands who were without power for days. But this snowless Winter isn’t over yet. Remember 1997? It only snowed once that year — on April 1.

This year’s ‘€œWinter That Never Was’€ is the polar opposite of 1888 which brought the worst Winter snow disaster the United States had ever seen.  Beginning on March 11 and stretching through March 14, this monster storm would dump 50 inches of snow on Connecticut and Massachusetts and 40 inches on New York and New Jersey, with sustained winds of 45 miles an hour. Entire homes were literally drifted over; a drift in Gravesend, Brooklyn was measured at 52 feet high.  Railroad lines were blocked taking days to clear; telegraph and telephone lines snapped or exploded isolating Montreal, Boston, New York, Philadelphia, and Washington DC for days. Electrical lines dropped all over New York City adding electrocution to the death toll from exposure and building collapse.  Over 400 people would lose their lives on land ‘€“ more than 200 in New York City alone ‘€“ and 100 more lives would be lost at sea in coastal vessels sunk from wave battering or by the enormous weight of ice that formed on superstructures.  This storm would prompt New York City to bury its electrical lines and its train stations and push harder for a subway.

In Nyack, snow accumulations were less than in Brooklyn though well into the two foot range with drifts blocking streets and docks sometimes engulfing entire houses.  Nyack was isolated from the rest of the metropolitan area with both ferry service stopped and trains unable to get through the snow. Daily commuters who had left Nyack on the morning train were unable to return for days.

Engineman Harry Lewis Sarvent,  a foreman at the Nyack Engine Yard, documented the delays in a log preserved in the archives of the Erie Railroad. ‘€œOn March 12th, 1888, the time of the blizzard, I was called to ‘€˜fire’ locomotive engine 327 for engineer Benjamin Scribner at 4:30 am, Monday and left Nyack about 7:30 am,” writes Sarvent. “We got back to Nyack the following Thursday afternoon.’€ In fair weather, this was normally a one-hour or less return trip.

Many Nyackers and other Rockland residents were trapped at various workplaces. Several Macy’s saleswomen from Nyack were permitted to sleep in the store for the duration in the store’s mattress department.  Nyack’s pioneering woman physician Dr. Virginia Davies, owner of the property that is now the Dr. Davies Farm store on 9W in Congers, was in the middle of her four-year stint as head of the New York Infant Asylum. She was trapped at her workplace and after more than two days of her snowy imprisonment led a party that TUNNELED through 18 foots drifts to get milk for the infants and children in her care. This act of heroism was braver than you might first think ‘€“ the majority of deaths from the blizzard were those who had attempted to tunnel their way through enormous drifts. Women pedestrians had a significantly higher rate of mortality because their heavy petticoats dragged them down, and frequently prevented their desperate attempts to extricate themselves from their snowy entombment.  An odd quirk of history shows that as a direct result, petticoats became far less massive and calf-length skirts made their first appearance in modern fashion.

By 1888, Nyackers and city folks had adapted to ‘€œmodern conveniences’€ such as electricity, gas stoves, telephones and easy access to fresh milk, groceries, heating fuel, transportation and newspapers. The papers published at least two editions a day and people read them as avidly as we watch the cable news today.  At first, people griped about not having anything to read, or being able to go to the theater, or not having their lights or telephone work. As the isolation stretched to days and no supplies were delivered anywhere on the East Coast, lack of food and heat switched from frustrating to fatal.  Because home refrigeration was not widespread, people who were used to picking up fresh food daily and having the coal delivered regularly went hungry and grew cold. Trapped in their homes and offices and shops and tenements and hotels, millions in the New York metro area were threatened with death from exposure or from hunger.

Many were forced to improvise, and that improvisation would result in one of the Nyack areas longest lived legends.  On the border of Blauvelt and Nyack, near Buttermilk Falls a family on Greenbush Road living in one of the old Dutch Sandstone Colonials was literally trapped in their home by drifts as high as the roofline.  The quickly ran out of firewood and could not get out their doors to get more ‘€“ so they began to burn anything in the house that they could – newspapers, artwork, beds, tables, chairs, and finally only one thing was left.  The family patriarch had passed away at an advanced age just prior to the blizzard and his coffin was in the parlor waiting for a now postponed funeral. With no other options, the family was forced to do the unthinkable ‘€” burn the old man’s coffin, and keep granddad’s body in deep freeze just outside the door.  Apparently, the old man (or his shade) was not amused. By all accounts, no one has ever been able to satisfactorily heat that parlor since; and it remains chill even in the hottest dog days of August.

Photo: South Broadway looking North after the Blizzard of 1888 when 20.9 inches of snow fell over three days. Source: Nyack Library