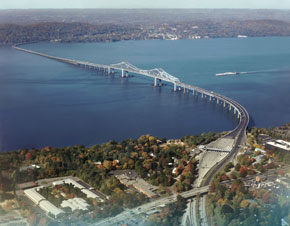 New York Governor Andrew Cuomo is looking for a public private partnerships to help fund the replacement for the Tappan Zee Bridge, according to Bloomberg News. To do so, Cuomo would need legislation passed in the state legislature that would allow private equity firms to finance public works projects. Cuomo’s administration had originally said that the bridge replacement project would get only public funding.

Such a bill would allow New York to lease roads, bridges, and other physical assets to private companies to help pay for them. The legislation would not allow the state to sell assets outright. The New York State Senate has already passed legislation that would accommodate public/private partnerships, but the State Assembly has yet to vote on their own version of such a bill.
The three-mile Hudson River span, which connects Rockland and Westchester counties as part of the Thruway system, carries about 140,00 vehicles a day, some 40 percent more than planners intended when it opened in 1955. Preliminary work is already being performed on the new span, which will be about 200 feet north of the current bridge. Twenty eight test pilings are being driven into the surface below the river.

After years of public comment in favor of including public transportation on the replacement bridge, New York Governor Cuomo abruptly reversed course. The new bridge project that Cuomo promots lacks integrated mass transit. As proposed, the new bridge will include four vehicle lanes on each span, eight lanes total and a shared-use bicycle and pedestrian path.

Infrastructure for future transit modes, such as a potential commuter rail system remains an option for a future phase, according to the Cuomo administration. But New York residents, especially those in Rockland and Orange Counties, who rely on the bridge as part of their daily commute, are critical of Cuomo’s plan, claiming that New York will never get around to putting a mass transit part if it isn’t part of the current plan.

Transit supporters have argued that a Bus Rapid Transit system incorporated into the bridge can cost less than the state’s projected range of $900 million to $2.5 billion. By comparison, the bridge replacement project without transit should cost $5.2 billion.

According to Bloomberg News, the public/private partnership that Cuomo is proposing is not unprecedented.

At least 31 states and Puerto Rico have laws that allow private investment in public projects, said Richard Norment, executive director of the National Council for Public-Private Partnerships, an Arlington, Virginia-based group. In Ohio, Republican Governor John Kasich has proposed leasing or bonding against the Ohio Turnpike as a way to generate money for other highway and bridge projects.