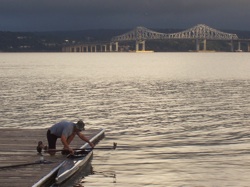 When considering the design options for the Tappan Zee Bridge, the old adage “everything old is new again,” takes on new meaning. On one hand I have to applaud Governor Cuomo and President Obama for pushing for a new bridge; especially at a time when the region is in the throes of a great recession with record numbers of construction related workers unemployed. I concur with the president and the governor that a well planned and designed new Tappan Zee Bridge is a wise investment in our nation’s crumbling infrastructure, a means to promote economic growth in the region, and create much needed jobs. Regretfully, on the other hand it has taken our elected politicians far too long to see the need for investing in our nation’s infrastructure and to create much needed jobs. To say the least, our nation’s leaders have been slow to recognize the severity of the current recession, and being too complacent in trying to remedy it. The reality is our nation has been in this economic debacle since 2007, which has resulted in making many unemployed Americans financial cripples for years to come.

Unfortunately, as we move forward to fast track this vital project, nothing has been learned by the mistakes made on the current one. We should also be asking ourselves why the original bridge in obsolete only after 55 years of service; this certainly is not a good example of American ingenuity at its best.

The original bridge was planned in America’s prosperous post World War II years, under President Eisenhower’s vision to build a much needed national interstate system to promote economic growth; an expansion to be achieved by the automobile at the expense of more fuel efficient mass transit. Regretfully, our nation’s leaders lacked the foresight to see the need for long term transportation planning. Being oblivious to the coming energy crises’ that has plagued our nation for the past forty years. In hindsight, I believe most of us today would agree the original bridge design should have also included a more fuel efficient mass transit rail lines. This is just another example of America’s inability to plan for the future. Confirming our nation’s mantra, ‘€œshort term gain-long term pain’€

Now here we are today, 55 years later realizing the existing bridge is an engineering albatross that consumes taxpayer’s dollars for ongoing repairs, raising pollution levels, while promoting our dependence on expensive foreign oil. In regard to the latter; we are reminded of this reality every time we find ourselves at the gas pump; reading economist’s predictions that gas prices will reach record high prices over the coming months; as well as the current instability in the Middle East.

In regard to turning the existing bridge into a park needs more careful economic analysis and pragmatic thinking. The cost to construct the park, as well as the cost to maintain the obsolete bridge over time will prove to be economically unfeasible. Furthermore, New York State is blessed with a beautiful natural geography and already has an abundance of park lands at our disposal. The current TZB needs 80% of its decking to be replaced, as well as the cost to paint and maintain the bridge/ park on an ongoing basis. I believe these funds could be better utilized in funding mass transit lines.

To be politically even handed and objective, I have to also agree with Westchester County Executive Bob Astorino who stated that a new TZB without mass transit will make the bridge a very expensive parking lot. But then again, we can turn the old obsolete TZB into an expensive park, and make the new TZB its expensive parking lot. Then build a light rail line to transport the park’s visitors from the new TZB ‘€œparking lot’€ to the old TZB. Thus proving we have not learned our lesson from our past mistakes; and are willing to spend billions of taxpayer’s money on making the same mistake of building another obsolete bridge. Like the adage says,’€ everything old is new again.’€ God bless the taxpayer- ignorance is bliss.

Dr. Richard Cirulli teaches Economics, Statistics, and Business Ethics at a number of local colleges, a business consultant, and hosts a weekly cable show, The American Condition that deals with current economic issues. He can be reached at profcirulli@optonline.net.