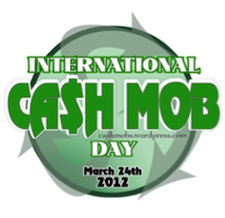 Cash Mobbing is a new movement which supports local businesses and communities. A Cash Mob is a Flash Mob, but instead of singing, dancing or rioting, Cash Mobbers meet up to spend $20 per person at a selected local business.

Nyack is participating in the first annual Ca$h Mob day on Sat Mar 24. There are a few simple rules to the Cash Mob:

Join us in person on Sat at 4p at O’Malleys when the identity of the business we will be ‘€œmobbing’€ will be revealed. After we shop at the designated store, we will reconvene for drinks and more mingling.

Who Started Cash Mobs?
Andrew Samtoy, an attorney in Cleveland, OH, is credited by the media with organizing one of the first Cash Mob events on November 16, 2011.  Cash Mobs have been sprouting up all across the U.S., Canada, and around the world.  While organized by many different groups of people, all appear to have the same goal in mind: to support local businesses that they love!

Who Is/Are Cash Mobs?
‘€œCash Mobs’€ aren’t a political or social organization, a corporation, a movement, or meant to be an answer to the economic crisis. By and large, Cash Mobs organizers  are simply people trying to make a positive impact on the businesses in their communities (and have fun while doing it)!

Do you enjoy having a vibrant downtown in Nyack?  Do you like shopping?  Do you like supporting your neighbors?  This is the event for you! Come join us in person on Sat or online anytime at Facebook.com/cashmobnyack.