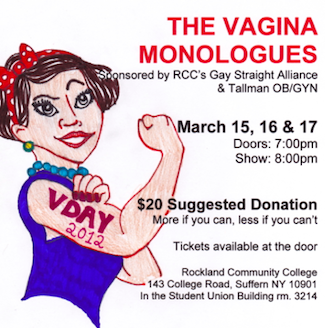 Next month, 18 women from all over Rockland County will be performing monologues about vaginas.

The performance is part of a worldwide movement to end violence against women and girls and is a part of V-Day. The women span in age from 18 to approximately 65. The facilitator, Arielle Bareket, grew up in Suffern and her dad is a gynecologist in Tallman. Arielle’s Mom, Kathryn, is a mother of three daughters and a son. The word vagina was used hundreds of time in their home over the years. After using the word so much at home, she thought it would be fun to say the word repeatedly on stage and to support her daughter.

‘€œEveryone, including me, comes from a long line of vaginas,’€ Arielle explains, ‘€œthat is where we all started.’€ And if you purchase a T-Shirt at the performance as part of the fundraising efforts for V-Day, that is what it will say ‘€œI come from a long line of Vaginas; Rockland County Vagina Monologues 2012.’€

V-Day began on Valentine’s Day in 1998 by Eve Ensler, a playwright and activist, who wrote a play called The Vagina Monologues in 1994. Originally staffed by volunteers, V-Day’s first fundraiser was at the Hammerstein Ballroom in New York and that show raised $250,000 in one evening.

The ‘€œV’€ stands for Victory, Valentine and Vagina.

V-Day’s mission demands that violence against women and girls end. Once a year in February, March and April, Ensler allows groups all over the world to produce a performance of her play, as well as other works created by V-Day and to use the proceeds for local projects and programs that work to end violence toward women and girls. There are currently over 5,800 events annually. The 2012 Rockland County Vagina Monologues funds will support the Rockland Family Shelter and Volunteer Counseling Services Inc. of Rockland.

Bareket, who graduated from Warren Wilson College in 2010, is an Assistant Farmer at Cropsey Community Farm in New City. ‘€œI just put Vagina Monologue fliers out there and held auditions in November,’€ she explained. ‘€œI was in two productions of The Vagina Monologues in college and it was such a powerful and positive experience for me. There are so many levels of what we are doing. On one level, we have this women’s circle where we can feel comfortable talking about these issues on a more personal level. Then there is the educational aspect of it whereby just putting on this production and talking to people about it we are educating our audience about these issues. Then there is the direct action aspect of it. All of the proceeds from the play go to supporting the wonderful local organizations here in Rockland County who are working to end violence in our own community.’€

The show includes such monologues as ‘€œMy Angry Vagina,’€ ‘€My Vagina Was My Village’€, ‘€œThe Little Coochie Snorcher That Could’€, ‘€œBecause he liked to look at It’€ and ‘€œThe Woman Who Loved to Make Vaginas Happy’€. Each year Ensler writes a spotlight monologue that can be performed. This year’s Spotlight Monologue is called ‘€œFor My Sisters in Portauprincebukavuneworleasons’€ and is spotlighting the common history of racism, poverty, slavery, colonialism and war that has thrown women into an endless cycle of violence and disempowerment. V-Day’s work in the war-ravaged Democratic Republic of Congo, post-Katrina New Orleans, and the earthquake devastated country of Haiti is to reveal links between these issues and to support women on the ground who are struggling for liberation and a violence-free culture.

Ensel also recently wrote a piece entitled Over It for the Huffington Post. This work will also be included in this local production.

‘€œI joined the group to be part of an amazing organization of women who mostly have never professionally acted,” says Buffy Cardoza, one of the Rockland County performers and a photographer who lives in New City. “We are willing to do something so important, slightly embarrassing, and wonderfully entertaining for the sake of women. The show will make you squirm’€¦make you cry’€¦make you laugh and ultimately make you proud to be a woman or support one. Ultimately I am terrified to perform, however I choose to raise awareness about many real current issues, raise funds and to give women a voice, while I amateurishly portray a lesbian sex worker.’€

‘€œI wanted to do something different and kind of raunchy,’€ explained Tamika Adjemian, who acts with the ‘€˜Strange Bedfellows’, an adult troop of the Children’s Shakespeare Theater in Palisades. ‘€œIt turns out that the monologues are far from that, they are poignant, beautiful and very real. Growing up in a single mom household, we never spoke about vaginas, it was very taboo. But here as a group of women of all ages, we discuss and share’€¦it is a challenging and great experience.’€ When not acting, Tamika runs a small Jam and Preserve business while also teaching all methods of food preservation through her business Belle Jar Canning, sews things to sell, occasionally teaches through Clarkstown Parks and Rec, cares for 13 chickens, is mom to two young ladies, and married to Daniel Hanchrow.

Where and When: The Vagina Monologues will be performed at the Student Union Center Building at Rockland Community College on March 15-17 at 7p. Reservations for groups of ten or more. Doors open at 7p for a Vagina Fair (raffles, merchandise, live music etc.) ; the show begins at 8p.

Why: 90% of proceeds will go to Volunteer Counseling Service of Rockland and Rockland Family Shelter. 10% goes directly to V Day. Funds are raised by ticket sales, sponsorships, program advertising sales, raffles, merchandise and food items sold on the night of the performance, T Shirts and button sales.

Donna Schmidt’s first job was writing for the Enterprise Newspaper in Westchester County, New York. An English Literature Major and Journalism Minor, she is currently the President/Owner of a small publishing company, Donnin Publishing and is a frequent contributor to  local publications and blogs.