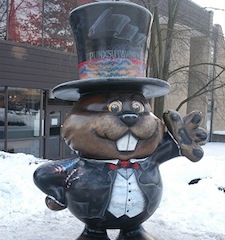 Have you noticed the unseasonably warm weather lately?  Just about a year ago, our area was digging out from a Groundhog’s Day Blizzard that shut down schools, closed businesses and covered the streets with snow.   This year is shaping up to be the second warmest Winter on record for our region.

This is amazing and sometimes saddening to see we are not having the classic Winter weather promised to us by Mother Nature.

Last year a total of 30.8 inches fell of snow was recorded in In New York’s Central Park. This year only six inches have fallen.  The reason is that a jet stream current that normally brings precipitation to our region has moved North, sending the snow we would usually see to Northern Canada.  In fact, there is so much snow that Canadian snowy owls have been migrating South to places like Michigan.

Puxatawny Phil says that Winter Fans may still get their fill. On Groundhog Day, the famous weather-predicting woodchuck saw his shadow — and his handlers predicted six more weeks of winter.  However, as history shows, the groundhog has failed to see his shadow only 16 times since 1888.  Even if the groundhog is right, this Winter will probably be remember as one of the warmest in recent memory.