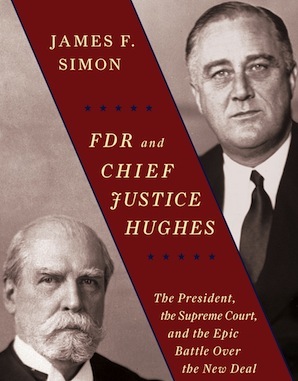 A new book by a local author shows that not only does history repeat itself, but some of the sensational conflicts 75 years ago are still making headlines. Governors boasting of balancing their state’s budgets while neglecting to mention their use of federal stimulus money. Politicians pounding podiums as they proclaim dire warnings of the certain demise of America should the current executive be re-elected. Today’s news? Certainly. But you’ll also find these conflicts in James F. Simon ‘s new book, “FDR and Chief Justice Hughes, The President, the Supreme Court and the Epic Battle Over the New Deal.”

Mr. Simon will be at Pickwick Books in Nyack on Saturday, February 11 from 5-7p for an interview being taped for C-SPAN.

Having a fascination for history and being intrigued by politics I read Mr. Simon’s book with great anticipation. I was not disappointed. Mr. Simon has crafted a well-researched and well written account that reveals the details of the tug-of-war between two powerful personalities and intellects. One could argue that the book depicts a struggle for the soul of America.  It is an unrelentingly detailed recital of the intricate ties that bind America’s leadership class weaving FDR’s and Chief Justice Hughes life histories. Shades of the recent Supreme Court decision in ‘€˜Citizens United’ are reflected in Hughes early work in the insurance industry investigations. Influential corporations and wealthy individuals gaining access to legislators through lax or non-existent campaign finance laws.

The early chapters covered an era that was the beginning of what we, in our time, are witnessing the end of, restrictions on how political campaigns are paid for. The more things change the more they remain the same.

The book begins with an account of the early formative years of both men providing insight into the shaping of their personalities and intellectual make-up. The early lives of the two protagonists were such that it seems inevitable that they would come together, in a way, to play major roles in the shaping of America as we know it today. Both were seemingly groomed for their respective roles and were perfect counterweights.

The sections of the book that discuss the various New Deal cases provide a window behind the scenes of the Supreme Court’s decision making process. It would not be too far off the mark to call it the high court’s equivalent of the legislative process informally called ‘€˜sausage making.’ The uninitiated may feel compelled to watch despite the messiness of what they are witnessing knowing the result could be very tasty.

Although the focus of the book is FDR and Chief Justice Hughes, when painting on the canvass of history, it is impossible to tell the story without drawing in the many supporting players. The result is a sweeping saga and retelling, in a cogent fashion, of a critical time in our history and the people who saw the country through it.

In many ways it is a story as much reflection of pre-World War ll America as it is of our own time. The country was just as divided then as it is now and as it was at the beginning of the Great American Experiment. America is of two minds and the tension between them accounts, in large measure, for our strength.

As the telling shifts into the early years of the war it becomes clear that the three branches of our well thought-out government worked. America survived a near economic catastrophe and would soon prove itself worthy of being a ‘€˜super power’. The proof of the pudding is the fact that America is still here.

Glen Keene, JD, CPC is an attorney and success coach emphasizing small businesses. His law and coaching practice is in Nyack where he lives with his wife Susan. He can be contacted at  GlenKeene.com or glen@attorneykeene.com.