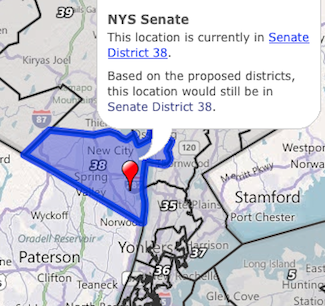 In Part II of this series on New York State redistricting, Elijah Reichlin-Melnick looks at techniques political parties use to maintain majorities in areas where they are in the minority.

We all know that New York is a predominantly Democratic state, yet Republicans have maintained control of the New York State Senate for all but two of the last 48 years. Despite the fact that it’s been 20 years since a Republican won a U.S. Senate election, 28 years since a Republican presidential candidate carried the state and 38 years since Republicans had a majority in the State Assembly, the State Senate keeps a GOP majority year after year. Their secret weapon is called redistricting, and if the proposed new maps for the Senate districts pass in anything close to their current form, Republicans won’t be losing their majority any time soon.

To achieve the difficult goal of ensuring a GOP Senate majority in a heavily Democratic state, the Republican mapmakers have always used two basic techniques, known as ‘€œcracking’€ and ‘€œpacking,’€ to minimize the number of districts with Democratic majorities. In redistricting lingo, cracking refers to the practice of dividing up areas which vote heavily for the rival party into multiple districts, and making sure that all of those districts are balanced with more than enough of your party’s voters so that your party can win them all. In the proposed senate redistricting plan, the Democratic strongholds of Ulster County (home to liberal Woodstock and New Paltz) and the city of Rochester will be rendered politically powerless by the GOP’s plan to split Rochester into three districts and Ulster County into four. In the middle of Nassau County on Long Island, the heavily Democratic area around Hempstead is sliced up between five districts, all of which contain enough of the more conservative parts of the county that they will likely remain Republican. The result of cracking these three Democratic strongholds is to deprive the Democratic party of three senate seats they would otherwise be likely to win.

In some areas, there are so many Democrats that attempting to crack them into multiple districts would just create multiple districts with Democratic majorities, thus backfiring on Republicans and leading to what’s often called a ‘€œdummymander.’€ In places like this, the only option for Republicans is to ‘€˜limit the damage’ by packing Democratic voters into one or more overwhelmingly Democratic districts so that the surrounding districts can remain safely Republican. So, for instance, in the Buffalo metro area, where the population of the city and inner suburbs fills two senate districts, there are more than enough Democrats to ensure that those districts would have Democratic majorities of around 60%. To avoid this undesirable outcome, Republicans have packed as many Democrats as possible into one district, creating a seat that will probably give a Democrat 80% of the vote. Meanwhile the other seat will be nearly evenly divided between the parties, giving incumbent Republican Mark Grisanti, who in 2010 won a fluky election in a heavily Democratic seat, a vastly improved chance at reelection. Similarly, in Westchester, currently home to two senate seats with Democratic majorities of around 60%, Republicans have drawn one seat which would give Democrat Andrew Stewart-Cousins 75% of the vote, and a second, much less Democratic seat that would be a prime pick-up opportunity for Republican Bob Cohen, who narrowly lost a bid for a more Democratic seat in 2010.

Since upstate is more conservative than the New York metro area, Republicans have traditionally used redistricting to maximize the number of senate seats outside the metro area. Because New York’s constitution generally bans districts from splitting towns (although it allows splitting cities), it would be nearly impossible to draw identically sized districts; therefore, districts can be 5% larger or smaller than the ideal population (derived by dividing the state’s population by the number of districts). Based on 2010 census numbers, the ideal population for a senate district is 307,356. If politics didn’t enter into redistricting, you’d expect that some districts in all parts of the state would be a bit larger than ideal and others throughout the state would be a bit smaller. Instead, under the proposed senate lines, every district in New York City and Long Island has too many people, and every district north and west of Westchester has too few. Specifically, the City and Long Island districts have an average population of 317,505, while the Rockland and upstate districts have an average population of just 293,685. And since the population downstate is growing, while the population upstate is shrinking, these districts will only become more and more unequal over the coming decade. All told, if the proposed senate plan did not stuff 340,000 extra people into over-populated downstate districts, an additional (probably Democratic) seat would have to be created in the New York City area, to the detriment of Republican ambitions.

To be fair, Republicans aren’t the only ones who try to manipulate the redistricting process for their own gain. The Democrats who created the proposed districts for the State Assembly have also used cracking, packing, and the same kind of manipulation of district sizes to dilute Republican strength and maximize the number of Democratic seats. However, with a few exceptions (The Question Mark District and The Spiked Crescent District) the Assembly lines avoid some of the bizarre shapes that characterize the senate districts. Also, while the Assembly proposal inappropriately exaggerates Democratic strength, even non-partisan lines would still give Democrats a majority, so the gerrymandering in the Assembly doesn’t have as significant an impact on the overall shape of state politics as the gerrymandering in the State Senate.

How can we remove the ability of Republican and Democratic partisans to manipulate the redistricting process to their benefit? And is there any hope for disgusted New York voters who hope to see fairer lines in time for this year’s elections? I’ll answer these questions and more in part three of this series, coming next week.

The CUNY Mapping Service at the Center for Urban Research has created an interactive map where you can see how proposed redistricting may affect your neighborhood. The join effort with the The New York World, attempts to answer questions like:

For more information and instructions on how to create before-and-after maps for both the NYS Assembly and the Senate, visit UrbanResearch.org.